Have I Got a Film for You: COMPANY on the big screen

on April 01, 2012
I’ve slowed down my theatre-making and theatre-going in the last few weeks, though with the Melbourne International Comedy Festival now open and work beginning on my next two projects, I am slowly getting back into the swing of things. My downtime has been helpful, getting back my energy to put into new shows and planning an overseas trip for August.

The new shows are exciting, but nothing I’m willing to discuss in public just yet. Apart from the fact my producer would kill me, there’s a time when new projects should be nurtured without them being picked apart by fellow-theatre makers, friends or the public. I am nervous enough handing off a first draft of a play, let alone having people pour over my thoughts and ideas.

My trip? A return to the centre of the theatre-making and theatre-going universe – New York City. I first travelled there in 2010 and even upon leaving the city, I was making plans to return.  This time, I’m travelling with my sister, who hasn’t been to NYC before – so it will be exciting to show her around, as much as it will be to return there.

While we hunt for an apartment to rent, I am slowly planning out what shows to see; in 2010 I overdosed on Broadway shows, this time I’m going to try to focus on Off-Broadway and Off-Off Broadway shows. Given the number of shows I’d love to see on Broadway though, it’s going to be tough narrowing things down.

One reason my sister and I are travelling to New York in August (apart from the ridiculously great price we got on return flights in peak season!) was to see Stephen Sondheim’s Into the Woods in Central Park. I mean, it’s not exactly site-specific, but Into the Woods in a park with a castle in the background? I imagine it will be quite special, especially considering it's one of mine and my sister’s favourite musicals. 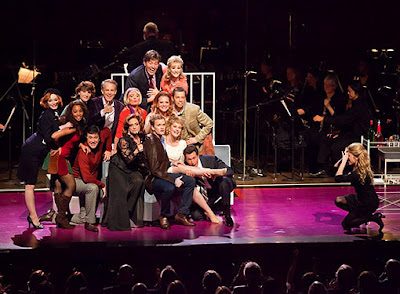 Speaking of Sondheim, yesterday I saw a “cinecast” of the 2011 production of Company that was staged at Lincoln Center last year with the New York Philharmonic. A “cinecast” is a filmed version of a stage show that is screened in a cinema – and it’s slowly becoming a trend around the world. Cinemas must love this stuff – a niche market, sure, but it must cost them less to show and they charge premium prices, which the niche market is willing to pay.

Because anyone who is a fan of musicals or Sondheim or any of the star-studded cast is probably happy to pay a little bit extra for a show they couldn’t have seen otherwise. This particular production was only performed four times, so even New York City residents who wanted to go most likely missed out.

Company is one of the last great Sondheim shows I have never seen before – and one of the shows whose scores I know quite well. It was great to finally see the songs in context, what little context there is in this “concept” show that is essentially a series of short stories about marriage linked by the character of Robert – an unmarried man in his thirties who fears commitment.

I still want to see the show on stage, of course; it’s one of those shows that is a great showcase for musical talent – and the entire cast gets a moment to shine. And the text allows it to really be opened up by a wide variety of interpretations – how cynical should it be played? How much irony? Should each vignette feel entirely different or should the production go to pains to make it feel more cohesive?

Not that the script by George Furth feels unfocused, but there truly is only one character arc to follow, that of Bobby – the single man whose married friends all have an opinion on who he should date, who he should marry or whether he should get married at all. All the characters and the songs work toward telling Bobby’s story. The rest of the cast is entirely supporting.

Much like Sondheim’s Follies, which is modelled on an old revue-type show with a story about the past and nostalgia, Company does have those signature songs that allow the supporting cast to steal the limelight. And this production – where even filmed and projected on a big screen, I felt like applauding many of the songs and a couple of performances in particular – is no exception. 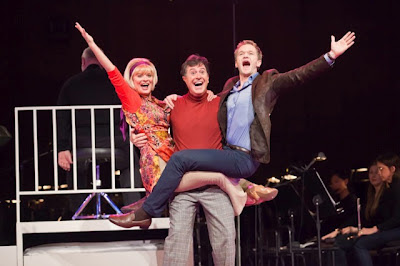 Stephen Colbert and Martha Plimpton are hilarious as Harry and Sarah. Christina Hendricks plays against type, as a dense air hostess. Katie Finneran’s performance of “Getting Married Today” is another of her great comic turns. And Patti LuPone owns the stage with her rendition of “The Ladies Who Lunch”.

But the show belongs to Neil Patrick Harris and his performance of Bobby, reminding us yet again that he’s no longer Doogie and shall not always be Barney – but can be and should be seen on stage in musicals as often as possible. And it’s not like he hasn’t had Sondheim experience before, with Sweeney Todd and Assassins.

For me, though, the most important part of finally seeing the complete show – even in a cinecast “concert version” – was to see and hear the final song in context. Because, you see, I think “Being Alive” is somewhat flawed.

Does Bobby really come to the conclusion that “alone is alone, not alive” after all these problematic stories of marriage have played out in front of him? Or are the lyrics the ultimate in ironic trickery from mast Sondheim?

The song, of course, sounds beautiful. I’ve heard many versions on both cast recordings and the albums of musical theatre stars. But are we truly to believe the message of the show is that you are not alive unless you are married? Since, it’s equally true that the rest of the show suggests that a happy marriage is almost a myth.

I’m not sure. I think the way this production ended, with Bobby alone on his couch, his friends leaving without wishing him a happy birthday, with Bobby not forced to blow out his candles and “make a wish” – that he has finally found contentment and decided to live without worrying so much about what his friends think.

I know Sondheim wrote two other songs as the finale for Company – “Multitude of Amys”, which was only appropriate for an earlier version of the show where he proposed to Amy at the end; and “Happily Ever After”, a much bleaker conclusion, whose title was clearly ironic, given the lyric:

Much of the rest of “Happily Ever After” appears in “Being Alive” but the final song is trying to be less of a downer on a night that’s already filled with cynicism. And I’m still not sure if it quite works.

But I’m happy to believe that Bobby sings that final song believing he might have found an answer and that final moment alone in his apartment is his wry acceptance that he probably hasn’t.

The cinecasts of Company were screened across Australia this weekend – and there are some places also screening it this Tuesday night. I recommend seeing it, if you can – hope it leads to more Broadway shows screened locally in cinemas and possibly a DVD release in the future.