Uncommon Things: The Seizure, The Heretic & The Goat

Ever since seeing their production of Thyestes, I have made it a point to see every production by The Hayloft Project. With the independent theatre scene flourishing in Melbourne, it’s impossible to see everything – even by companies I admire. But Hayloft is as restrained in the number of productions they do as they are in the productions themselves, so seeing all of their work in Melbourne is easy to do. And such a pleasure.

Writer and director Benedict Hardie’s The Seizure, is a take on the myth of Philoctetes – after Sophocles, who tried his hand at writing a play about this story twice in his long career. Hayloft’s work is often defined by its minimalism, but I think this production is its most subtle and graceful yet. The set – charcoal drawings on a white floor/ white wall - evokes the image of a beach on an island, without a grain said or a tuft of grass. The cast of four are rarely on stage together and the dialogue they have is sparse and precise. It’s both the story of Philoctetes and a sliver of the Trojan War myth, narrated by Odysseus, who is merely a supporting player here.

I love stories that are propelled by the force of history, characters living their lives in period settings, unable to stop what we know will come to pass. Here it is the force of myth instead, but the stories are so ingrained in our storytelling and mythmaking, the force is no less strong for it. Another stellar outing from Hayloft.

Director Matt Scholten is a prolific director on the Melbourne independent theatre scene and his work with Daniel Keene is transcendent and rightly celebrated. The other shows I’ve seen him direct are strengthened by his vision. His work on The Heretic is no exception. Unfortunately, even for such a visionary director, it’s easy to see that he had his work cut out for him here. Richard Bean’s play is problematic.

Sure, I wasn’t too thrilled by the notion of a climate-change denier character being the centre of the narrative, but Noni Hazlehurst was sure to make her character more sympathetic than it is on the page. I thought perhaps the story might have challenged Diane’s worldview, but she never so much as wavered from her dogma. And even if I could look beyond the lazy arguments Bean writes for his lead character to spout, I’m not sure the play has anything much more to say.

I was truly puzzled by the point of the entire second act. I tried to see it as an argument between logic and passion. I wanted to know if it was perhaps about the rational scientist versus the irrational lovers. I wondered if maybe it was about how science is supposed to rely on proof but it can often be misinterpreted by wilful people. But none of that works with what is presented.

Scholten and his production team do make the show move – I never once felt like I was struggling  with this two-and-a-half hour show – and feel immersive, with its use of the Sumner theatre’s surround sound system to evoke a thunder storm and helicopters hovering overhead. Otherwise, the sets are functional and uninspiring – and only Noni as Diane has anything very meaty to work with. 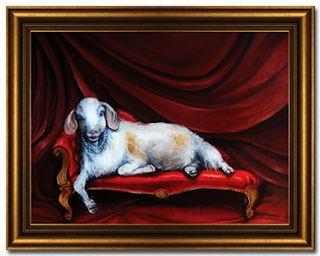 I am fairly ignorant of the work of Five Pound theatre, though I am well aware of co-founder Jason Cavanagh’s acting work outside his own production company and his position as owner/operator of The Owl & The Pussycat in Richmond. I am also acutely aware of director Christine Husband’s work as an actor and as a director.

Disclaimer: Christine directed a show of mine at the Owl & the Pussycat last year and was in Painting with Words & Fire earlier this year.

Five Pound has stepped outside of the Owl & the Pussycat for its production of Edward Albee’s The Goat (or, Who is Sylvia?) and has submerged themselves in the Collingwood Undergound Carpark for this black comedy about love, tolerance and understanding.

Inside the cavernous and echo-y space, Christine has used these elements as strengths and virtues of this production. With audience on both sides of the performance area and the open set (designed by Emma Warren) allowing the space to be observed from all angles, this is voyeuristic theatre at its best. The act of observance suggests that we might all be driven by how people observe us. Is that the tragedy at the heart of this play? Not that a man falls in love with a goat, but that other people might find out about it and judge him?

Susannah Frith and Jason Cavanagh are the stand-outs in the cast, doing most of the heavy-lifting here, as wife and husband, Stevie and Martin. They have to maintain a delicate balance between keeping the performances realistic without the show becoming too dark, too dramatic. There are some great laughs to be had in Albee’s dramatic set-up.

The echoes in the carpark as the actors shouted and cried and grieved draws the audience even closer. Characters appearing out of the darkness and the void which surrounds the performance space was thrilling. A great play in a great production in a great space.

Unfortunately, Five Pound have announced they are postponing the rest of the season – transfering The Goat from the Underground Carpark to the Owl & the Pussycat. It’s a pity, because the show works so well in the carpark space. Sometimes I’m all for performances being up close and personal (I love the Owl & Cat, don’t get me wrong), but sometimes sitting in a cold carpark, wrapped in a blanket, drawn to the only light in the cavernous darkness does something to a show and says something about it. Hopefully more audiences are drawn to the particular light of this production when it moves to Richmond in late June.