Quoting himself, badly: Aaron Sorkin and The Newsroom

on September 01, 2012
A long time ago, I was told not to use a famous quote to open a play – because I was setting myself up for comparison and dooming myself to failure. Quote Shakespeare or Proust or Freud, but do it somewhere in the middle, where it rolls off the tongues of your characters and not as the first impression the audience has of your work. 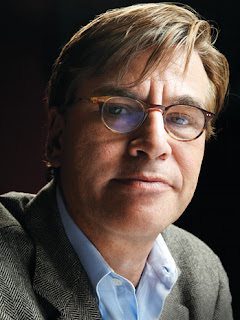 Aaron Sorkin’s The Newsroom doesn’t open with a quote as such, but it does – just as his Studio 60 on the Sunset Strip did 6 years ago – open with a Network-like “I’m as mad as hell and I’m not going to take it anymore” scene, setting up comparisons between Sorkin and Paddy Chayefsky, as well as between the two narratives.

For me, though, the problem here is not this direct comparison but the shorthand way that Sorkin is telling and re-telling stories. Two later episodes (“Amen” and “The Greater Fool”) climax with Sorkin repurpsoing other people’s endings to finish his stories – as if acknowledging the lifts from Rudy and Oliver Twist is enough to absolve him of cheap narrative resolutions. And narrative theft.

When his laziness transfers from resuing dialogue and retelling stories to the way he draws The Newsroom’s female characters, it’s pretty distasteful. Every one of the main female characters in his HBO show can be described this way: professional women who are supposedly brilliant at their jobs but cannot wrap their (air-)heads around simple technology and are regularly downright ditzy, most often in front of or because of men.
If that character description was isolated to one of his female characters, that would be fine. If that character description applied to one of his male characters, I’d feel like he was treating characters more equally. There are two pratfalls in the pilot episode – one each from Jim and Maggie, but the difference is, Jim is never revealed to be incompetent in his job or around simple technology. And while he’s not great at relationships, he doesn’t seem to be an emotional basketcase like every woman on the show.

The one exception might have been Jane Fonda’s character of Leona Lansing. She is competent at her job and is never shown to be emotionally compromised or incompetent around the use of emails or the internet or simple tasks related to her job. My only disappointment is her emotional reaction in the season one finale to the actions of her son, Reese. If Sorkin’s women were more rounded, I might have enjoyed watching a hard-nosed, take-no-shit CEO being reduced to tears by her child’s terrible actions in the name of business. So I’m not saying this turn was the wrong choice, so much as it seems to confirm a Sorkin bias – women are good at their jobs until personal relationships become involved. Then they are a mess.

Sorkin got a lot of crap for his portrayal of women in the film, The Social Network, about the creation of Facebook. I defended him at the time for a couple of reasons. One, sometimes a writer is drawn to characters like the ones in this film who actively treat women badly or to write in a millieu where female characters are marginalised. It’s hardly surprising that this film and that story had little time for women in the narrative.

The second reason I defended Sorkin at the time – and the reason The Newsroom’s poorly drawn female characters stand out to me – is The West Wing. For me, that is the high watermark of his career – especially on television. His feature film high watermark for me is A Few Good Men, with the note that I am one of the few who finds The Social Network to be overrated – especially in the canon of David Fincher movies.

I rewatched the pilot of The West Wing this week. It’s a very strong opening episode with a tight script, whose clockwork like structure introduces the cast with precision and a good mix of politics and laughs. The opening scenes are quiet in comparison to the opening rants of Studio 60 and The Newsroom and, in a show about politics, doesn’t feel too heavy handed in its messages. Unlike his current show, I rarely felt like The West Wing was talking at me and never that it was ranting. Unless maybe Toby was speaking, but he’s just one of those people. And even then, I never felt patronised.

Of course, as Sorkin’s mouthpiece in his new show, Will McAvoy is a bully and patronising and his rants form the raison d'être of most episodes. Sorkin has a point he wants made and McAvoy makes it. Even as Sorkin’s liberal bias is scattered through all his shows, his news show feels much more designed to tell us things – about its premise and its characters opinions – than any of his previous work.

But while the introduction of CJ Cregg on The West Wing involved trying to pick up a guy, with the scene ending in a pratfall, the cast of female characters in the show doesn’t feel like Sorkin’s used a cookie-cutter. And that opening scene only depicts one part of CJ – her inability to balance career and a personal life. In the scenes depicting CJ at her job, she is the paragon of professionalism.

The doe-eyed Donna and the poorly-conceived Mandy feel like complex, complicated and entirely different characters from each other - compared with MacKenzie, Maggie and Sloan on The Newsroom. And that’s only taking into account the major female characters in the pilot of Sorkin’s behind-the-scenes of the White House series. Even Lisa Edelstein’s call girl character is allowed more dignity and smarts than MacKenzie or Maggie ever are.

This is the reason his new show frustrates me – because I know he can do better. I’ve seen him write complex, complicated and compelling ongoing narrative drama filled with a cast of fascinating characters – many of whom are great at their jobs and terrible at their personal lives. But at least that trope never seemed to condemn anyone to a single-dimension or a repetitive storyline.

I’m not sure that Sorkin’s male characters in The Newsroom fair that much better – though none of them are the same as each other, they are Sorkin types that he’s written and worked with before. We haven’t gotten to know many sides of Jim or Don or Charlie – and what we do know of Will doesn’t stop me thinking he’s a bully and an arse.

There were small hints at great drama in the first season of The Newsroom but they were few and far between. None of the episodes were entirely successful – many are hamstrung by poorly written relationship dramas or saddled with Sorkin paying homage to other better written stories by other people and himself.

And even for a man who wrote a television series about hard-working politicians who are noble in their pursuit of serving the people, the very premise of The Newsroom is a little too idealistic – fixing the mainstream media – for me not to marvel each week at how much disbelief I have to suspend.
aaron sorkin screenwriting television the newsroom the west wing

jazifer said…
Not watched it - for precisely the reasons you outlined here.

What I would say re: the women in TSN is that while I have zero objection to the portrayal of misogyny when it exists, and certainly have no problem with the depiction of a world where women are not central, is that I believe he still misrepresented the attitudes and behaviour of the women on screen. It was a world I didn't recognise, and that's not because it was unfamiliar to me.
1 September 2012 at 19:31