Goddess: there’s one in a cinema near you 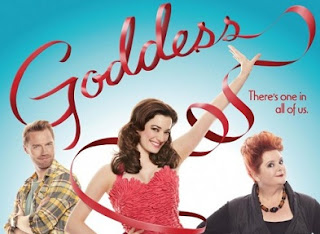 Elspeth Dickins (Laura Michelle Kelly) is a singer-songwriter who is raising out-of-control twins, while her husband is off in the Southern Ocean tracking whale migration and recording whale song. She has deferred her dream of being a singer, while her husband pursues his environmental passion – but while he’s away, she’s given the opportunity to follow her dreams.

Goddess is an original Australian film musical, which has been poorly promoted – the poster and tagline are generic and the trailer cuts together the least-interesting bits with the lowest-common-denominator jokes. Had I seen the trailer before I saw the film, I probably wouldn’t have seen the film.

With the continuing production of musicals for both big and small screens in America, the fact that the trailer shies away from promoting the fact the film is a musical puzzles me. The most inventive parts of the film are the songs and the choreography. The songs are smart, insightful and clever. Funny when they need to be and emotional when the story calls for it.

Director Mark Lamprell does an excellent job keeping the tone light throughout, though there is a lot of drama in what Elspeth is going to do when fame (and possibly fortune) are dropped in her lap. I find the tension over how she balances the different facets of her personality really compelling, while being bouyed along by the jouyous nature of the songs and the dance numbers.

Make no mistake – this is a proper musical. Sure, it’s based on a cabaret show, so it’s essentially a one-woman musical, embellished for the big screen – a couple of songs being devised for her nemesis (Magda Szubanski), a flirtatious Sydney busker (Dustin Clare), and her husband (Ronan Keating). But the songs tell us the story as much as the dialogue between characters or from the “Greek chorus” of the – at first disapproving – mothers’ group.

Now, after some Googling, I knew Laura Michelle Kelly’s musical experience (both West End and Broadway, the film version of Sweeney Todd) – and the bona fides of Ronan Keating and Magda Szubanski. But it was credits for Tamsin Carroll and Lucy Durack – well known local musical theatre supporters – that piqued my curiosity about the film. Note, though: while they both have great parts in the film, they don’t get to sing. I’d say it was a missed opportunity, but the film is so great, getting them to sing as well might have over-egged the pudding.

The film has a lot to say about the roles of women inside and outside the family home, as well as about supporting people’s creative talents, plus  a subplot that seems to satirise marketing at women – the titular Goddess laptop, “for every part of a woman’s life”. Which is about on par with the tagline for the film itself, “There’s one in all of us”.

I don’t see enough Australian films as it is. It’s remarkable to me that a film that trades so heavily on theatrical and musical conventions might have bypassed me, if not for a friend mentioning that Carroll and Durack had small parts in the film. And it stuns me that this film isn’t being pitched directly at the local musical theatre-going crowd. Because it’s perfect for them.

Goddess is a smart, passionate, delightful and often funny film about balancing dreams with real life; about finding our voices, when they are threatened to be drowned out by the ambition of others and screaming children. The songs are amazing, the performances are top-notch and the whole film is just a hell of a lot of fun.

Note: I was going to link to the trailer, but I decided against it. Just see the film - it's far better than the trailer suggests.
australia film film review film:goddess review

Sally said…
Eeee, I LOVED Goddess :D I saw the preview for it when we saw Les Mis, and was practically counting down until it opened ;) Definitely one I want to buy on DVD when it's out.
2 April 2013 at 12:45