on August 30, 2013
We’re two-thirds of the way through the year and a quick look at the theatre I’ve seen this calendar year, I’m almost certain that many – if not all – of my Top Five shows of the year, I have seen in the last couple of months. Across main stage and independent theatre, I’ve been quite disappointed in the quality of shows I’ve seen in Melbourne. Until recently.

The tide began to turn with MTC’s Neon Festival and ever since then, I’ve been much more impressed. Here’s some thoughts on shows I’ve seen recently. 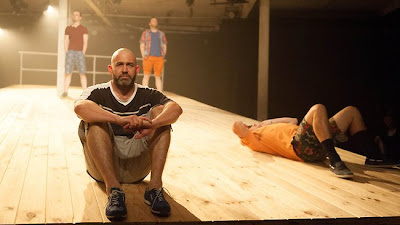 Patricia Cornelius and Susie Dee have designed a confronting but poetic examination of masculinity and misogyny at 45 Downstairs. The angled stage is disconcerting to look at even before the four men begin to prowl around it, but this simple design choice adds a lot of weight to Cornelius’ already dense script. The four characters are beautifully delineated, even though they have so many thoughts and instincts in common. What I loved most about it was Cornelius’ use of language, to heighten the experience, but to also dig under our skin and expose the dark heart of these average blokes.

Until Sept 8th at 45 Downstairs 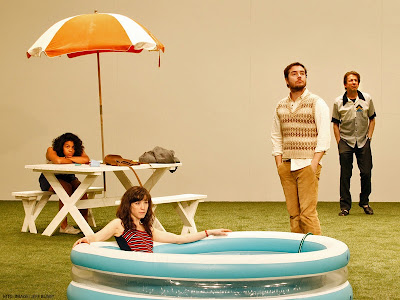 Simon Stone may be controversial when the matter of adaptations arises, but when examining his work as it stands, he’s one of our most exciting directors. This somewhat modernised adaptation of Chekov’s classic play is entirely faithful to plot and character, but beyond that the design and direction is bold and very memorable. The stark white frame enlivens the comedy but makes stark the tragedy that is befalling the family. The cast is superb and I love the way that Stone plays outside inside the proscenium. This didn’t change my world, but it did reaffirm that Stone is an exciting director and his adaptations are fascinating.

Director Daniel Lammin and students at Monash University have explored their memories and the evidence of the Columbine high school shooting in this perceptive and insightful piece of verbatim theatre. Lammin is an exciting director on the independent scene and this is his biggest work to date. He also calls it his most important. The show is both the actors recreating moments from that fateful day in 1999, reciting quotes from interviews, reneacting videos and talking about their own recollections of the events. The devised script and Lammin’s direction keeps moving, enhanced by beautiful performances, evocative lighting, affecting music and choreography that is sometimes frightening and sometimes amusing. 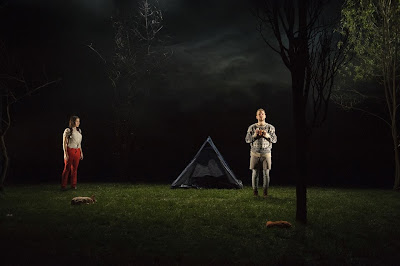 I was so enamoured with this show, I saw it twice. I haven’t seen any other shows more than once this year, not necessarily because I didn’t want to but because I couldn’t (sold out) or I didn’t have time (so much theatre on in Melbourne; also I have theatre to make, as well).

Every element of this show comes together to enhance every other. It may have started with Kit Brookman’s insightful script about growing up, burgeoning sexuality, gender confusion and familial discomfort (and perhaps abuse), but it’s brought to life inside Mel Page’s incredible set and lit to perfection by Richard Vabre and evocatively scored by James Brown.

Luke Mullins’ assured direction pulls everything together, keeping the performances suitably restrained but always somewhat otherworldly. This play feels real and like a dream and like a nightmare, sometimes all at once. Central to the performances on stage is Sarah Ogden’s subtle, complex and layered turn as Sasha, who is both lost in the woods but also able to navigate her way through the trouble she finds there. Ogden is always magnificent, but here she flawless.

The rest of the cast are superb in supporting Ogden, Tom Conroy and Marcus McKenzie play multiple roles – Conroy standing out as Tom and Sally. Brian Lipson is suitably unnerving as a character referred to in the programme as “Ghost” but he’s much more menacing because he feels so real.

The play is non-naturalistic, though it tricks the audience with its somewhat naturalistic dialogue at the start. Some of the events seem muddled, but the production is so evocative in so many ways – and so beautiful to look at and to listen to and to watch, that even when you can’t quite understand what is happening, you can appreciate the beauty and feel the characters’ uncertainty anyway.