A Modern Superwoman: Workshop in Adelaide 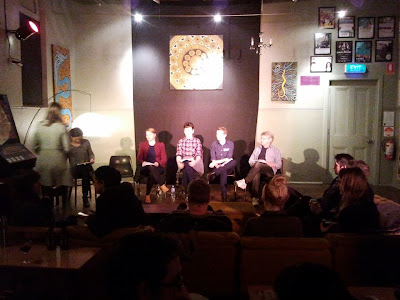 Last weekend, as part of Five.Point.One’s Reading Sessions, my play “A Modern Superwoman” was workshopped for a full day and then given a reading that night.

The version that was workshopped in Adelaide last weekend was an updated version of the play, but it’s the first time I’ve sat down with a group of actors to discuss it, interrogate it and see how well it holds up.

The play has been in development for the past eighteen months or so. I’ve been working closely with actor Clara Pagone during the writing – from workshopping the original idea to making sure each draft got more and more clear in a narrative and character sense.

It’s now on its fourth draft, revised for Adelaide – and it was in pretty good shape before the workshop. When I write the fifth draft, I’m going to be very confident the changes I make will be for the better; I gained new insight into the characters from the actors who worked on it, as well as from the input from our director, Tiffany Knight.

Having talked to a couple of directors in Melbourne about the play earlier this year, the fourth draft has always felt like it was ready for the next step – getting it on its feet, working with actors to hear how it sounds and to get feedback about character motivation and narrative logic. Does each character’s story make logic sense? Emotional sense? Does the out-of-order chronology enhance or detract from the piece? Would everything track if the play was laid out in chronological order before being shuffled again?

The best part about getting actors involved is that they take ownership of their characters; they need to make connections that other actors don’t need to make. And sometimes they find motivations that I didn’t intend, but which strengthen the work. In particular, the character of Bernice – who has developed the most from her original conception – finally came into focus for me when Caitlin McCreanor talked about Bernice’s relationship to two other characters in the show: Marion (the titular Superwoman) and Richard (an off-stage character). I did some last minute re-writes in one of her scenes, to bolster her character and play down the character of Richard.

As we progressed through the workshop, we’d read a scene and then Tiffany would ask the actors involved in that scene where the character is emotionally – what has happened just prior to that scene, what state of mind are they in. Even if this play was played chronologically, there are large leaps of time in the narrative – allowing the actors to explore where they are both before and after particular moments in the story.

All of the actors had great observations to make – and if anything was unclear, I was asked to clarify my intention. That’s always a good moment in the creation of a work, because I need to be on my game, I need to be able to explain my choices in the writing. Admittedly, sometimes the actors made connections that made more sense than what I’d originally intended; occasionally I could fold that into my goal for the scene and sometimes I had to admit that what the actor brought to the scene made more sense.

I think there was only one scene where I just had to admit it needed a lot more work, because as it stands it’s confusing about its intentions. Or I was confused about what I was trying to achieve. We left it in for the reading, but it’s definitely the moment that stands out as needing more work.

In contrast to that scene, at least the rest of the workshop showed the script is in good shape. It needs work, but at least now I have specific goals to achieve for draft five.

Thank you again to five.point.one for the opportunity to workshop the show in Adelaide, as well as present it as a reading – which provided some good feedback, too. One man on Facebook called it “the highlight of the series so far”, which was amazing to hear.

And thanks again to Tiffany Knight, our wonderful director who kept the workshop moving – and somehow we got through two read-throughs and some intense discussion of the piece in the seven hours we had together.

And thanks to Sophie Bruhn, Claire Glenn, Matt Gregan, Roger Newcombe and Caitlin McCreanor – all of whom had great things to say about the play, their characters. Wait ‘til you see the next draft!
a modern superwoman adelaide five.point.one reading workshop