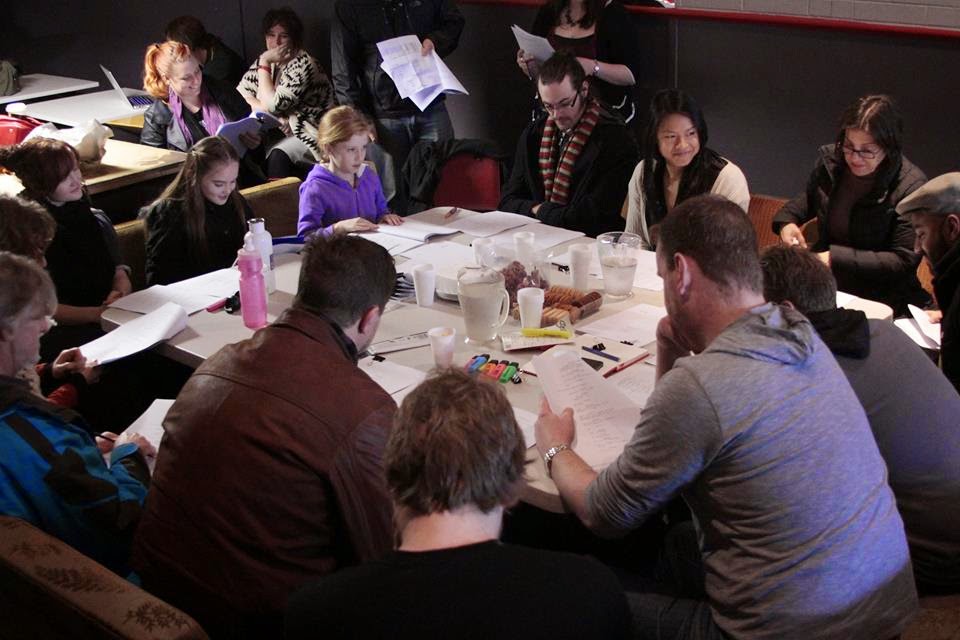 Late in 2013, Fiona Bulle had an idea for a television show – and we’re just about ready to start shooting it. Today, though, was a table read of Episode One, with as much of the cast and crew and we could get together on this chilly Melbourne Sunday.

It’s been seven months since Fiona corralled a group of four writers into a room and we started throwing ideas around. Sonnigsburg will be a six-part supernatural drama that is scheduled to air on Channel 31 in 2015. And the writers room was a new experience for all of us. Early on we decided who would take ownership of what episodes – and then it was a matter of pitching the kind of stories we wanted to tell and the kind of characters we wanted to populate the series.

Sonnigsburg is a mystery; a town in the woods that hasn’t been visited for seventy years. Or so the legend goes. Nearby is the town of Mount Sunshine – and it’s there that our main character stops on her way to research Sonnigsburg. Savannah’s ex has called her out of the blue, desperate for help – but when Savannah arrives in town and her past begins to catch up with her, she realises that the residents of Mount Sunshine are haunted by their pasts, too.

Fiona, our creator and Executive Producer, wrote the pilot episode that begins shooting next week in Walhalla – a town in country Victoria that bills itself as “the most haunted town in Australia”. Perfectly fitting for our supernatural drama.

Today was our first opportunity to get most of the cast and crew together; to meet, hang out, get to know each other a bit better – and have a read through of the first script. It was great to finally hear the whole script being read by our amazing cast of actors.

Sonnigsburg will be produced by Rock Bottom Productions and Wrongtown Films with assistance from the Community Broadcast Fund and Channel 31.

LilyLu said…
Very cool, Keith! I hope episodes will eventually be streamed so those of us outside of Australia can watch the show, too!
7 July 2014 at 02:45

Keith Gow said…
We believe the streaming content on the Channel 31 site can be seen the world over. We are also looking at other forms on content distribution.
7 July 2014 at 08:10