I'll see you again in 25 years: Twin Peaks returns to the medium it changed 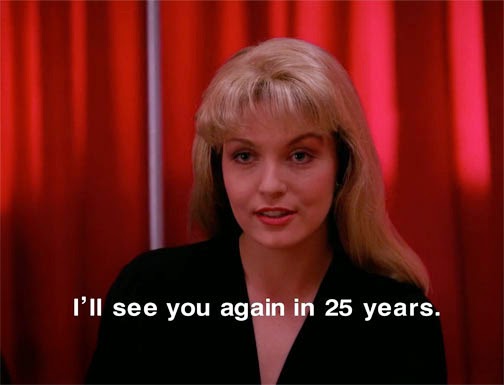 It took a long time for me to accept I would never get narrative closure from Twin Peaks.

I was a teenager when it first aired and I was obsessed with it. As obsessed as anyone could be back in 1991, when all you could do between episodes was discuss it at school or read reviews in the newspaper. And it was like nothing I’d ever seen. It was unlike anything else on television.

It’s not just that the show was cancelled – I was used to that happening, especially as a science fiction fan, watching series after series debut on FOX only to last a season and then disappear. They were looking for their next The X-Files. They never found it. Maybe, Fringe?

It was the fact that the ending was so bleak. So dark. So devastating. Evil triumphed. The town of Twin Peaks, torn apart by the murder of Laura Palmer, tried so desperately to recover – only to be consumed by the darkness that surrounded the town. And the series’ hero, FBI Special Agent Dale Cooper, was... well, even twenty-five years later, I’d hate to spoil it for you.

Two years later, I was able to finally see Twin Peaks: Fire Walk with Me – David Lynch’s prequel film, which was even darker. And cruel. And a revelation. It wasn’t the narrative ending I needed, but there was a small glimmer of hope in there. A story of resilience. And thematic closure, a closed circle. If nothing else.

I introduced a lot of people to the series over the years – mostly because I wanted people to experience the wonder of diving into a story that doesn’t prepare you for where it goes. It’s melodrama. It’s a detective story. It’s a horror film. It’s an oddball comedy. People should experience all of that in one package at least once.

But part of me wanted people to watch Twin Peaks just so we could comfort each other after that ending. And maybe, just maybe, if we found the right clues, we might figure out where the story was headed. And maybe everything would be alright. For the characters and the viewers.

After Fire Walk With Me divided critics and made no money at the box office, there was no real reason to believe the story would ever continue. I continued to discuss the show, once I got online in the late 1990s. I hung out at alt.tv.twin-peaks for years discussing the intricate details of the series and trying to decipher complex theories of what it all meant. I bought nearly every issue of “Wrapped in Plastic” magazine – which contained episode guides and essays about the show.

And once the show was out on DVD and I was able to introduce people to the series in crystal clear quality, Twin Peaks sort of receded into the back of my mind. Like a dream I’d once had and never forgotten. Not many series could withstand the scrutiny I had given it over the years – and the number of times I re-watched it.

When publicists began teasing the Blu-Ray release early this year, talk of a continuation popped up again. David Lynch has often said that he thinks the town still exists and that life goes on there; he’s just not there to film it. It’s a typically Lynchian idea – a narrative that continues without anyone there to see it.

After years of wanting answers and wishing the ending hadn’t been so tragic, I came to see the beauty of that kind of ending. Sometimes having unanswered questions is why things stick in your mind. Had it all been wrapped up, maybe none of us would be talking about it now?

Six months ago, had you asked me if I wanted more Twin Peaks, I would have said no. And yet on the release of the Blu-Ray set, with the ninety-minutes of unseen footage from Fire Walk With Me, I was able to re-enter that world and felt more keenly than I had in years what I had been missing. But it wasn’t that I wanted more, I was just grateful to have another taste of that cherry pie. And the damn fine coffee.

What a difference a few months and one single announcement makes. Twin Peaks is returning to television in 2016, fulfilling Laura Palmer’s prophecy that she would see Dale Cooper again in twenty-five years. And I couldn’t be more excited. A story I never thought I would see continue is coming back to television; a medium it changed so radically when it first aired. If we are in a new golden age of television now, Twin Peaks ushered it in.

I’m nervous, of course. Returning to fictional worlds can be disappointing (see the Star Wars prequels) or unforgettable (the Before series). But I bet David Lynch and Mark Frost are only willing to return now because they can see a way back in. They have found their way through the dark woods and know how to tell the next chapter in the Twin Peaks story.

Twin Peaks was ostensibly a soap opera. I can imagine the 2016 iteration being something more akin to the adult dramas that populate cable networks these days. Back in the early 90s, complicated ongoing narratives weren’t something that viewers were used to. Now, if a series doesn’t have a story that is laid out over an entire season, viewers change the channel.