How old were you when you first saw STAR WARS? 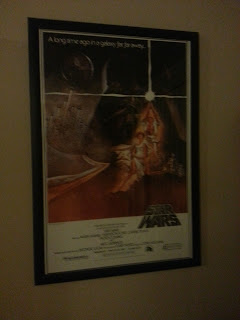 No spoilers for The Force Awakens.


Watching films is so different these days. It’s not just the films themselves. It’s the way we watch them. The way we talk about them. And how quickly we devour them and wait for the next thing.

How old was I when I first saw Star Wars? Five, maybe? Or seven? I was too young to have seen it on its original release (I was only two at the time), but I have a distinct memory of watching it at a friend’s house on VHS after school. This is before we had a VCR at home, so this was a big deal. Such a big deal, that we watched Star Wars a lot.

I think I remember The Empire Strikes Back being released, but I’m not sure. I would have only been five years old then. What am I remembering? A re-release before Return of the Jedi when I was eight? Possibly.

I do have a very clear memory of seeing Return of the Jedi for the first time, not just because I was so excited for the movie – but because I am pretty sure my mother would have preferred to see Roger Moore in Octopussy, which was playing at the same time. (My James Bond obsession didn’t begin until high school. So the first Bond film I saw at the cinema was The Living Daylights.)

I know I saw other films before Return of the Jedi. ET: The Extraterrestrial, for one. I’ve still got the programme somewhere. Yes, films came with programmes even in the 1980s. And the original Spider-Man movie starring Nicholas Hammond – which was just episodes of the TV series that were released theatrically outside of North America. We saw that at the drive-in.

Was Star Wars shown a lot on television in the early 1980s? Could I have also watched the films that way? Had my friend with the early model VCR taped Star Wars off the television? We didn’t get a VCR until around 86/87. I’m pretty sure hiring the Star Wars films was at the top of my list of priorities then.

Watching films is so different these days. Kids today aren’t going to be able to pin-point when they first saw something, because the Blu-Rays will have always been easily available and streaming services deliver a unwatchable amount of content into their homes.

Back when I was young, you had to wait for something to be on television. And unless you were waiting for those screened-every-year favourites like The Wizard of Oz or The Sound of Music, you might never know when you’d next see your favourite films.

When my James Bond obsession started, it wasn’t easy to find all the films – even at video rental places. I just had to hold out hope they might appear on Bill Collins’ Golden Years of Hollywood. They eventually did, with Bill’s withering commentary on the scripts and George Lazenby’s acting – even though he quite liked On Her Majesty’s Secret Service overall.

Then again, movies often took years to make their television debuts back then. I don’t think E.T. aired on television until the late 80s.

The Star Wars films weren’t available to buy on VHS (in Australia, at least) until the mid 1990s – and then we were able to see them in their full widescreen glory. Imagine our surprise to see that Han Solo was so relaxed in the Cantina, he had his foot up on the table. What a guy!

And by then, George Lucas was announcing the original trilogy’s return to the cinemas in Special Editions – and a series of prequel films! How exciting! The kid in me couldn’t believe it was finally going to happen. We were going to see Anakin Skywalker’s fall from grace.

What a disappointment that turned out to be. The Special Editions, too. All those childhood memories turned on their head. All those hours reading Star Wars comics and buying Star Wars action figures and plotting Star Wars stories and making Star Wars radio plays... yes, okay, that last thing is weird. But we totally did it! Recording stuff onto cassette was the coolest thing back then. 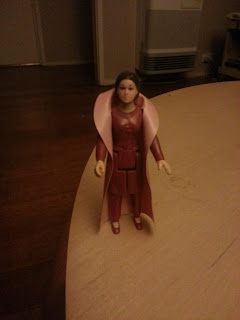 As the prequel trilogy was released, there was a lot of talk about whether the joys of your childhood could be recaptured. Maybe we were so nostalgic for those original films, nothing could live up to them? Maybe kids of the early 2000s could love Jar Jar as we loved Yoda or the Ewoks? Maybe the original series had bad dialogue and wooden acting, too?

Each of these new films landed with a thud and a vague hope that the next one would be better. And I remember at the time desperately trying to find things I liked about each of them. I didn’t want those new films to be a waste of everyone’s time. I wanted to find something worthwhile.

After Revenge of the Sith was released in 2005, we all went on with our lives. The Expanded Universe of books and comics got ever bigger and more complicated. I didn’t read that many of the novels, though I did occasionally hear about significant events in the characters’ lives.

There was a Clone Wars animated series or two, but I never watched them, either. Those amazing films of my childhood were so long gone that I just couldn’t bring myself to care.

There was talk of a live action TV series at one stage – and I got pretty excited about that concept. I know they started to write that but nothing ever happened.

In 2012, when Disney announced they had purchased Lucasfilm and that a seventh Star Wars film would be released in 2015 – I couldn’t help but get excited. Yes, the prequels were bad. Yes, nostalgia isn’t what it used to be. Yes, this film had so much speculation surrounding it... how could it possibly live up to those stories I made up, those comics I read, those radio plays and action figure battles we had?

How could it honour and live up to the original trilogy and be its own thing?

Watching films is so different these days. The last time I went to a midnight screening was The Phantom Menace, I think. Or maybe the Special Editions. These are the only films where I’d even consider that. Mostly because I don’t think I could convince anyone to go to a midnight James Bond film.

It’s been five days since the film opened. A lot of people have seen it already and multiple times. It’s made more money in five days than The Empire Strikes Back made in its entire theatrical run. Yes, things were cheaper back then, but they also ran for a lot longer.

Somehow, the spoilers haven’t been splashed over front pages or discussed outside of spoiler space. I mean, if you search for certain things once you’ve seen the film, you’ll see that some websites are assholes. And Google itself will unfortunately fill you in on things you might not be expecting...

Oh, and The Force Awakens itself? It lived up to the hype. Well, it lived up to my expectations. Somehow, after waiting 32 years since Return of the Jedi, I was pleased. Very pleased.

I could nitpick. I could complain. But this new film gets so much right, it seems ridiculous to worry about small things.

The new lead characters are wonderful. The return of old favourites is handled perfectly. And the new bad guy balances the needs of both sets of stories. It’s all very clever, really.

Watching films is so different these days. Not just the films, which can be eerily similar to those from the past. But also the way we watch them, because it makes us feel five years old again. Or seven. Or however old we were when we first saw Star Wars.
empire strikes back nostalgia return of the jedi star wars the force awakens the phantom menace