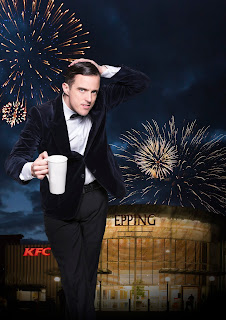 Andre DiVenuto has a dream. A dream to host his own tonight show on Foxtel. He’s planning to record a pilot episode with his band, Bryan Jovi – they do Bryan Adams and Bon Jovi covers – but they have gone missing. And he’s waiting for his special guest Sam Neill to arrive from Tullamarine. Nothing is going to plan.

I was enticed to see Andre Tonight by the talent involved – writer and actor Chris Ryan and director Mark Leonard Winter. As the press release reminds us, they worked together on the brilliant Thyestes but I’m not sure that’s exactly how to pitch this show, a parody of tonight shows; Rove, as Andre explains, but darker.

The format of the night show is hackneyed. It’s barely changed in fifty years. There’s a band and there’s a special guest. And the “things go wrong behind-the-scenes” genre is one of my least favourite things. But Andre Tonight transcends this set-up because it’s not just a parody of tonight shows, it’s an insight into our obsession with fame and trying to become famous.

Ryan’s dressed in a terrible suit with an impressive bald spot; he looks tired and when Andre describes himself as “double nervous,” Ryan shows us exactly what that could mean.

Putting the show in the Comedy section of the Fringe Festival guide is a bit of bait-and-switch; they’re selling you a parody but giving you something much more fresh and exciting. Andre’s double nerves make you feel for him, while he tries desperately to entertain the audience that have shown up for his taping.

Early in the show, after it’s clear Bryan Jovi isn’t coming, Andre wonders if there might be anyone in the audience who can sing a little and play the keyboard. A woman stumbles from the audience, hair across her face, an almost-finished glass of red wine in her hand. She spits out her name “Meg” and falls onto the stool behind the keyboard.

In a shock to no one, “Meg the Egg” wows the audience, and while Andre continues to wait for Sam Neill, his real special guest is actually singer/songwriter, Megan Washington.

Ryan’s performance is filled with neat touches and his script brings a very Melbourne feel with references to Epping, Gumbaya Park and Clark Rubber. There’s a moment late in the show where Andre’s dream is slipping away and he’s sitting there, forlorn, eating dry Milo straight from the can. It’s hilarious and pathetic all at once.

Winter’s direction is loose without letting the show get out of hand; you don’t want this show to be too silly or too serious.

Andre Tonight is on late night, every night of the Fringe Festival, except Mondays. It’s a great way to end a Fringe binge – in the company of a sharp script, a smart actor and an exquisite singer.