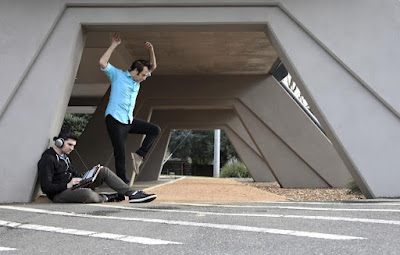 The audience wait on the steps of Arts House; this is not unusual for the Fringe Festival. Nothing’s unusual for the Fringe Festival, really. But waiting on those steps to be taken somewhere has become a pretty regular occurence. When every room and venue and space in North Melbourne is full, sometimes the audience needs to be led first and be allowed to find the performance.

Infinitum, by award-winning choreographer Gareth Hart, plays out in the lanes and alleys and carparks hidden behind the North Melbourne Town Hall. We stand and watch a van reverse out of a driveway. Is this part of the performance? A Fringe Festival volunteer pokes her head around the corner and quickly steps away...

We’re a small crowd of a dozen, being led down these back streets, contemplating these spaces without any context. What will we find here? What will we see? And hear? Is walking down Errol St without knowing where we’ll end up a part of the performance? Yes. Absolutely yes.

A man in an laneway dances. We move away from him, led to a spot that’s not quite optimal. We can’t quite see what’s going on. As an audience, we’re used to sitting in rows and taking up limited space.

There’s another man, untangling cables, sweetening the soundscape. There’s the noise of North Melbourne nightlife, and now there’s a new sonic expression cutting through the din of the places that surround us.

Soon, though, the dancer and the sound designer untangle those cables and the dancing affects the sound design. The dancer drags a microphone along the ground and we are hearing the asphalt and the pavement. The microphone cord twists and spins around the dancer’s body – and the audience begins to spread out, to relax and to find a new vantage spot.

And then both performers move on and we follow... while local residents peek through windows  and motion-sensing lights, which are just part of the local infrastructure, blink on and off, becoming part of the performance.

There’s something thrilling about discovery at the heart of Infinitum. We’re looking at places we’d hardly ever take a second glance of. The show makes us hear things we wouldn’t usually absorb. Hart’s movement is delicate and considerate of his surrounds; he welcomed a car into the carpark where he danced, though the driver reversed away.

I’m seeing a few shows that are set outside during Fringe this year. Last night was overcast, the light of the day giving way to night, but Gareth Hart and Rod Price lit up the back streets of North Melbourne with beautiful movement and a soundscape that complemented and heightened the palpable air of excitement on this opening weekend of Melbourne Fringe.

Infinitum plays at dusk until Friday 23rd of September. Tickets on sale here.