on December 18, 2016
It took three years to get everyone to Sonnigsburg and now we’re at the end. Episode six was directed by John Erasmus and written by Keith Gow.

These last five weeks have been an amazing time for cast and crew to finally be able to share our series with you all. Apart from our dedicated Melbourne audience, we have people across Australia watching the series. We’ve also got viewers in the UK, Italy, Germany and the US. (Let us know if you’re watching from elsewhere, too!) Also we have a couple of viewers in Samoa!

I know some people who are waiting to binge-watch the whole series, once it’s online late Monday night. We’d love to hear from people who are having Sonnigsburg days or afternoons. It’s the perfect show to catch up on over the Xmas/New Year break, if you’re lucky enough to have one.

Posts on Facebook. Tweets on Twitter. The #Sonnigsburg and #ComeFindMe hashtags have been getting a workout. It helps us find you. It helps you find us. Make sure you tag your thoughts and feelings as you watch or after. For the final episode, hashtag #OneLastLook as well.

The finishing touches have been put on the show over the past few weeks. Episode six was finished less than a week ago – and then we had to do some tweaks to episode five after it aired, which is why it was uploaded to YouTube later in the week.

I’m really proud of the work we’ve done on the series as a whole and I’m very excited for you to see this final chapter. By the time the shooting draft of this script was written, I’d seen footage from the series and spent a lot of time on set with the actors. They had grown into their roles by the time we shot this episode and the whole production was humming along.

There were a lot of late and cold nights spent shooting this final episode. And a lot of distance travelled. There are scenes shot months apart that fit seamlessly together. And a particular scene where we couldn’t quite get all three actors in the same place at the same time, but it cut together beautifully.

Thank you to everyone who has been watching this tale of a haunted town that’s about trying to put your past behind you, even when it won’t let you go.

The road to Sonnigsburg has been a long one. The road away from Sonnigsburg is a lot tricker. Join us on Monday night for one last look. 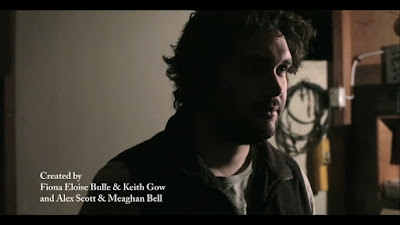