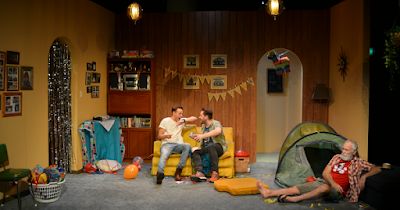 Scott is an AFL football player who is waiting at his family home to meet the son he never knew he had. Brother Ben is more interested in Scott’s career than the result of Scott’s one-night-stand. Mother Marilyn is excited to meet her first grandchild, while criticising daughter Jules for not becoming a mother herself.

Spencer, a new play by Katy Warner (A Prudent Man), is a rapid-fire comedy about expectations amongst family. While Marilyn’s focused much of her energy on Scott’s AFL career, she’s given up hope on her other two children. And, to be fair, they’ve given up too; on dreams both big and small.

There are a lot of stories about parents having high expectations for their children, but Katy’s new play also digs into children’s expectations of their parents. In some ways, Ben and Jules’ stories of losing faith in Marilyn are more compelling than their mother losing faith in them. And when their estranged biological father arrives, tensions are higher and the uncomfortable, sometimes brutal laughs come thick and fast.

Director Sharon Davis keeps the pace up for most of the play’s running time, only allowing the audience and the characters a moment to catch their breaths during the occasional fade to black. In some ways, Spencer plays like a domestic drama punctured by cutting remarks; if you played this story straight, it could be unbearable. But sometimes, with family, you gotta laugh.

There’s a lot of high energy work on the stage in this production, none more so than Lyall Brooks in the role of Ben. He’s the biggest disappointment of the family; divorced, living with his mother, coaching Auskick and a complete slob. Lyall bounces around on stage, lunging, stretching and eating M&Ms off his chest. His speech about coco-pops is both gross and hilarious and some late play business with a piñata is stellar physical comedy.

Jane Clifton’s Marilyn brightens up the stage in her colourful costumes even as she darkens her children’s days. She’s unhappy with Ben and Jules’ life, but she’s also struggling to understand why her successful son might not be enjoying the career she sacrificed so much for. It’s a truly remarkable performance; a mother you can’t stand but come to understand.

Rob Sowinski’s set feels like outer-eastern-suburbs chic from the 1970s that Marilyn and family have never updated. This family is stuck in the past in many ways, retelling jokes they’ve told all their lives and being unable to grow up.

Spencer is the child and grandchild the family is waiting for to arrive. They are already pouring their dreams into him, a child of two-years-old. Spencer captures a day in the life of a family who once had high expectations for each other and, now that they have failed, are excited to have a new family member that might make up for wasted opportunities.

Spencer is surpassing expectations at Chapel Off Chapel until May 28.