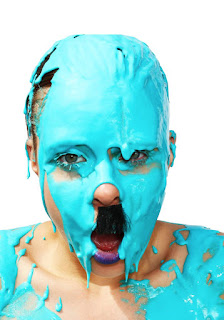 Kovalev has lost his nose but worse than that, his nose has taken on a life of its own. Based on Nikolai Gogol’s short story, The Bloomshed’s new show is a satire on capitalism, beauty and class.

Here, though, Kovalev is the head of the Disney Corporation, a maker and pursuer of dreams. His work at the head of a giant corporation is remaking the world. But as soon as he loses his nose and his sense of smell, Kovalev begins to lose control and power.

The Nose is a series of vignettes; wild and piercing insights into the modern world. We laugh at a lost nose and its sudden new life, but we’re also challenged by how easily we lose respect for the damaged or the disabled. We laud the successful without always considering how they made it or how they retain that power.

Creators and performers Elizabeth Brennan, James Jackson and Tom Molyneux have reanimated Gogol’s original in a vision of spotlights, glitter cannons and joggers whose only goal is to live up to motivational quotes.

Do not cut of The Nose to spite your face. At Brunswick Mechanics Institute until October 1st.