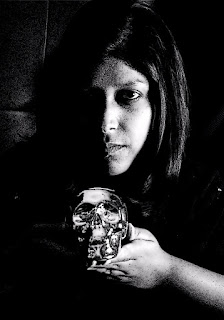 Ari is an aspiring actor, looking to audition for a role in Hamlet. She’s not interested in any of the female parts, though. She is going to walk into that audition room and nail the Prince of Denmark. Or Claudius. Or, at least, the ghost of Hamlet’s father.

While she practices for her audition, Ari is interrupted by her domineering husband Ben, barking orders over the phone. He sends around an assistant, Rachel, to fetch some paperwork for an upcoming court appearance and Ari quickly decides to put her dreams on hold. Acting is frivolous, Ben tells her. But Rachel doesn’t agree.

Ophelia’s Inner Monologue is a dense show that deconstructs the character of Ophelia in a clever, insightful and theatrically inventive way. If Ari cannot yet play Hamlet, maybe Rachel can help her find the essence of his mistreated girlfriend.

Ari and Rachel decide to improvise, to let Ari get into Ophelia’s head and understand her better. Rachel chooses to play the ghost of Ophelia’s mother and Ari must deal with the grief in her past to understand her present relationships with father Polonius and her boyfriend, the mad Prince.

This show has contemporary resonances about emotional trauma and gaslighting and being “ghosted” but it’s also a hell of a lot of fun. Writer/director/star Aridhi Anderson plays with theatrical convention, while digging deeply into gender politics and the reverence we pay to dated classics.

The show feels a little long and it could definitely benefit from an outside eye to help refine and tighten it. Anderson is a captivating performer – and singer – who could use some help with the Shakespeare itself, but doesn’t miss a beat in deconstructing the text.

It packs a lot into its running time, maybe too much, but it’s full of the enthusiasm of young performers and theatremakers.