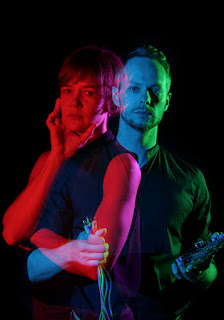 A rocky desert landscape. A wide blue sky. Tufts of faded yellow glass. And silence. Two scientists have braved the elements of a climate-changed world to commune with nature and talk to the earth and hear its pain.

The Sky Is Well Designed is the second show by Fabricated Rooms after Grief and the Lullaby, nominated for several Green Room Awards in 2015. Creator Patrick McCarthy has assembled an effective design team in Rob Jordan (sound and composition), Zoe Rouse (set and costume) and Kris Chainey (lighting) for this production at the Northcote Town Hall.

The silence with which the show begins is calming and as the show progresses, the use of sound ranges from comforting to unsettling. Once the scientist characters, played by Ben Pfeiffer and Emily Tomlins, begin their investigations, the various instruments they use make for a visual and aural treat.

The dialogue, however, is stilted. And the narrative, such as it is, has no shape. Theatre need not be narrative driven, but dramatically the show plateaus early on.

The performances are described in the publicity as hyperrealist, which turns out to mean one-note and dull. This isn’t the fault of the actors, who I have enjoyed elsewhere; The Sky is Well Designed is well designed, but it is not well written nor particularly engaging.