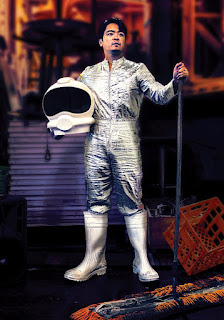 A man alone on stage; bright lights illuminate him and us. We see the remnants of other lives here, other plays and the man addresses us directly, a clump of people listening to his story. He breaks the fourth wall, he transgresses and tells us in detail about where he is from and his trajectory to get here. To where we are.

Will Eno’s Title and Deed is subtitled “Monologue for a Slightly Foreign Man” and the man taking up that mantle for the KIN Collective at Melbourne Fringe is Keith Brockett. Brockett has been doing memorable work on Melbourne’s independent scene for years and it’s such a pleasure to see him tackle this story of the Other and crossing borders.

I’d say the story of a foreigner moving to a new country and not quite fitting in is apropos for our times, but this feels like a tale that is evergreen. We don’t need the context of Australia leaving asylum seekers locked up on Manus Island or Trump threatening to deport non-white citizens to make this play feel relevant; that context just gives the play an extra frisson.

Director Laura Maitland keeps the show moving with Brockett on his feet and pacing, his character feeling like he wants to keep us entertained. He wants to fit in, even though his life has been quite different to ours.

Brockett is an engaging performer who quickly endears himself to us, the people of his new home. Eno’s script is a subtle beast; digging into what makes us who we are and how breaking down barriers and borders is both life affirming and terrifying.

Title and Deed is on in Studio 1 at the North Melbourne Town Hall until September 30th.