Melbourne Fringe: Too Soon, Too Now 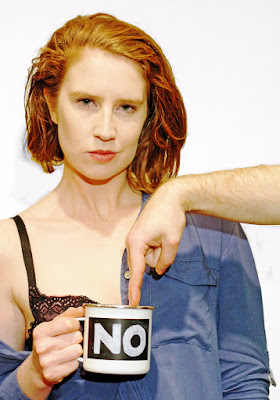 Leila and Maya can’t say no. They’ve tried to, of course. But the guys in their life just won’t listen. To get one guy off her back, Leila tells him she’s too busy making a show for Fringe. Too Soon, Too Now is the end result – a show made because a dude wouldn’t believe Leila was not interested.

Writer and Director Fiona Spitzkowsky has crafted a sharp black comedy that really is “too now”. The conceit of a show about making a show is one thing, but making a show to keep these two women safe from over-enthusiastic men? That’s fascinating. And hilarious.

Bridget Sweeney and Sandra Chui bounce off each other both verbally and physically. We join them in the middle of enjoying a night out and we’re already on their side because of the exaggerated dance moves. Their ongoing “relationships” with Guy and Hottie (both played by Emil Freund) target hook-up culture, consent, the Male Gaze and physical reactions to intimate encounters. Sweeney and Chui are a delightful (dark) comic pair.

Too Soon, Too Now is blacker than it first appears, but is also clever, energetic and chaotically blood-soaked. In a space as small as Errol’s Upstairs, this show is intimate but never cramped; though perhaps watch where your fake blood sprays?

Book soon or now for TooSoon, Too Now at Errol’s Upstairs only until Sept 19, which really is too soon.