Melbourne Fringe: Traps – A Romantic Comedy for the Modern Sociopath 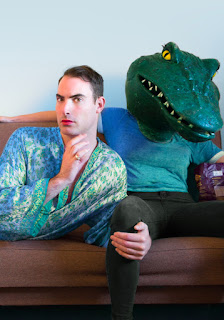 Three characters struggle to tell their own stories, while the narrator laments the fact he has no character at all. Stephanie works for and is in love with vet, Joe. Joe still lives with his mother and she’s never happy. Julia has accidentally shot her dog and when she walks into the surgery, the soapy melodrama hits overdrive but remains underwhelming.

Traps is a queer, camp comedy on Valium. For all the outrageous situations involving mother and the forty-foot croc and the narrator desperately trying to insert himself into the narrative, the show isn’t particularly funny and outstays its welcome. Most of the gags are hit several times and the law of diminishing returns kicks in.

The show plays with gender roles and tackles male privilege and there's some satisfaction in the character of Stephanie not letting the narrator dictate her story, but enticing subtext is not enough.

There is a lot of talent on stage and behind-the-scenes in this show. Traps has been nominated as one of the best of the Fringe Festival in the Performance category. The judges must have seen it on a night when the audience was engaged and laughed more; last night’s audience was not on this show’s side. And I don’t blame them.