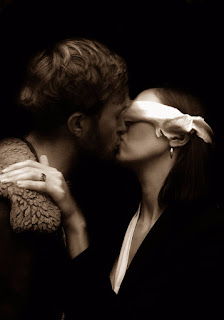 Reaction Theatre have coupled a great pair of short plays by David Finnigan and Isab Martinez about the intimacy of kissing.

The first play, to heat you up and cool you down, is set at rush hour in a cheap café. Two waitresses are run off their feet, their minds anywhere but on the routine of their work. One character’s thoughts appear as projected text on the back of the set and sometimes as voiceover; the other character’s thoughts are manifest physically, played by another actor.

It’s a tricky text to perform, intercutting the different kinds of media slows the momentum in moments; we don’t always feel the characters are having these thoughts but merely reacting. Occasionally all the elements fall into place, particularly in the moment where the two waitresses kiss for the first time, complicated by one character’s confusion over how own sexuality.

The second play, which gives us the overall title of the night – Appropriate Kissing for All Occasions – is a monologue, a lecture about kissing by an expert in personal relationships. Actor Christina McLachlan is striking in her red dress and heels, ready to tell us about kissing and to give demonstrations on the different kinds.

There’s tension throughout this piece as McLachlan finds audience targets and her lecturer character begins to unravel, reminded of her own recent relationship and how a kiss isn’t always just a kiss. It’s a fun, accomplished performance.


This is a solid pair of plays but the first one (the order of the plays was switched late in the run) about the waitresses wasn’t nearly as smooth as it could have been. The second one was much more straight forward and the audience interaction made it fascinating and fun.
fringe2017 melbourne fringe melbourne fringe festival