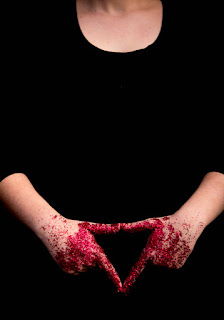 Eve Ensler’s 1996 play, The Vagina Monologues, has been described as one of the most important pieces of political theatre ever devised. It has been produced thousands of times around the world and led to the creation of a non-profit movement that has raised millions to end violence against women.

Two decades later, it continues to be a vital theatrical work, given the stories of body image, self-worth, violence, genital mutilation, sex work and birth resonate in whichever community the show is produced.

Deafferent Theatre create theatre by and for the deaf and hard-of-hearing communities. Their production of Ensler’s play includes sign language, projected text, voice over to bridge the gap between the deaf and hearing audience but plays most directly for the deaf community.

In spite of this play being widely produced, I’ve never seen a full production, though I have seen excerpts and read the published version of the play. (Ensler continues to write monologues; different productions will include different combinations.)

Four women sit around a table and trade stories about sex, sexuality, menstruation, puberty, violence and learning to love their bodies. A monologue that catalogues different slang names for vagina is left for the hearing audience to decipher, as the performers sign and mime. A monologue about the messiness of childbirth which is visceral when read aloud, becomes slightly comical when those anatomical moments are recounted in AUSLAN.

As a hearing person, I didn’t engage with some sections of this production, but I was thrilled to see Deafferent create a work for a community that isn’t well represented on stage or for an audience that isn’t always catered for.

The Vagina Monologues is an important work for any number of communities and exposing it to deaf and hard-of-hearing both on and off-stage reminds us all how relevant these stories remain.
fringe2017 melbourne fringe melbourne fringe festival