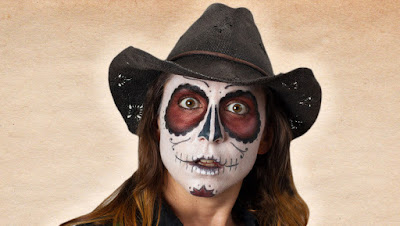 Gather round, ladies and gentleman, Rama Nicholas has a story to tell you. It’s a one-woman Western musical filled with cowgirls, talking horses, whores with hearts of gold and a Spanish cowboy on his way to defeat Death… in Cancun.

Death Rides A Horse is a real gem, with Rama playing a dozen characters and narrating the show and singing the songs, sometimes in four-part harmonies, all by herself. But it’s not just an astonishing feat of performance, it’s supported by a strong script and an awesome musical score.

Caterina is from Coyote and she wants to be a famous cowgirl, but the women of her home town mostly make a living on their backs or on their knees. There’s a new and evil Sheriff in town and they are soon enemies, particularly after Caterina shoots him and gallops off into the desert.

This show is an hilarious pastiche of Western and musical clichés – and Rama is expert enough to make sure you’re never lost with who is speaking or what is happening next. With simple stage craft and excellent lighting design, this is a superb piece of comedy and theatre.

See Rama Nicholas in Death Rides A Horse at the Malthouse until April 8th.
MICF micf2018