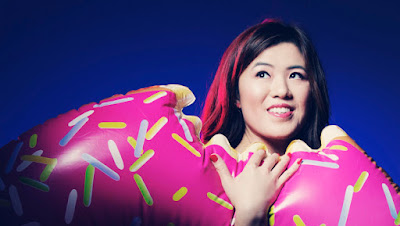 For a festival that most punters think of as a long line-up of stand-up comedians, the percentage of stand-up shows I’ve seen this Comedy Festival has been pretty low. I actually wonder if traditional stand-up has a degree of difficulty that makes it tougher than other kinds of comedy shows; fifty minutes of a performer and a microphone - a style we’ve seen so many times.

Annie Louey stands out in the stand-up crowd because she is a young woman with Asian heritage who can mine her background for rich stories of culture clashes and dramatic stories of life and death. This Aussie Chinese Millennial has some great tales to tell in a refreshing, honest style.

Annie can make you laugh about young love, travelling the world, her snake-soup-making Chinese family and their surprise that this Aussie girl can use chopsticks. She also has some pretty dramatic stories about fainting into a fire and the passing of her elderly father. But she finds humour in these dark moments, too.

I was a bit lost with some of the pop culture references she was making, but I guess the generation gap makes that kind of thing inevitable. And she was so old when she got her first computer – 12. Back in my day, kids didn’t get computers until much later. But that difference in perspective is what makes this show really special.

Butt Donut isn’t polished, though. Annie is still finding her way, even after seasons in Perth and Adelaide. But the material is there and when she grows in confidence, Annie will be one to watch out for.