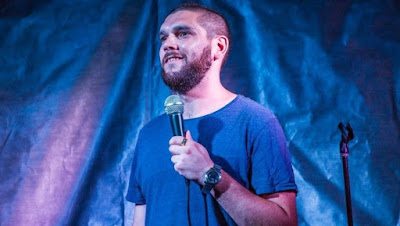 Cameron Duggan is very relaxed, in life and on stage. He’s often late for work; his record is four hours and they sent him home. He takes his time with his show, too. The audience gets no sense he’s in a rush. His stories are low stakes, really – he found some really cheap socks once and he’s not that keen on art galleries.

I do wonder what his other nights at the Festival have been like, though. He had some hecklers in the night I saw him and he took a pretty relaxed approach to them, too. A bunch of drunk Irish lads were in for a beer and a good laugh – and halfway through the show they left to get more beer. Cameron took it in his stride. (They came back and gave Cam a beer, too. So that was nice.)

When he asked if anyone in the audience was regularly late to work, the guy who responded first turned out to be a life guard. Cam thinks that’s probably the kind of job you wouldn’t want to be late for, but he got more worked up about how well built the life guard was than the fact he might have been deficient in his responsibilities at the pool.

Cameron seems like a nice guy (he thinks he’d be on a list of nice guys) and his show was a pleasant way of filling in an hour between two shows I’d been asked to review. I admitted as much when he spotted me sitting alone in the audience, wondering what I was doing there. “I had an hour to fill in,” I said. I think he’s surprised when anyone turns up. He’s that kind of guy; loves a beer, always late to work, has a good sense of humour.