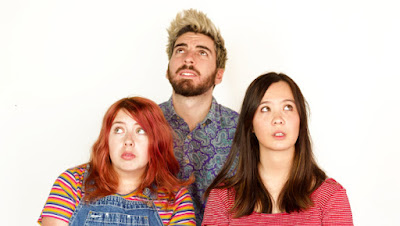 Hit By A Blimp is a sketch comedy trio, combining the improv/scriptwriting/acting talents of Tiana Hogben, Caitlyn Staples and Jayden Masciulli. I’m Here is the second show for the trio, after Who We Were at Melbourne Fringe in 2016.

The show starts with the trio reciting excuse after excuse for not attending a friend’s party – a list that we’ve all seen if we’ve ever created an event on Facebook. It gives us a good grounding for the pace at which the show will move; the show zips through its sketches like we’d scroll through our social media feeds.

A lot of the show is concerned with how we interact online and in person – and there’s a particularly insightful and hilarious bit about two people at a party, who only know the birthday girl and no one else, but they are forced to make conversation. Tiana and Jayden capture the awkwardness of trying to connect with nothing in common, while Caitlyn interjects with a musical commentary about how the two are getting along.

There’s jokes about waiting for texts, a dance sequence about Uber Eats, and a sketch about sexually explicit cocktails. There’s an odd bit about the language of attraction and dating amongst three buoys with a cameo from a flock of gulls, which was clever, except the trio all pronounced buoy as if they were Americans.

Some of the punchlines were killed by the transition music or blackouts. And while pace is important, some of the sketches could have worked better if the performers had been clearer.

Overall, though, I’m Here is delightful hour of sketches about young people in the digital age.

Get Hit By A Blimp at Trades Hall tonight or tomorrow only.
MICF micf2018