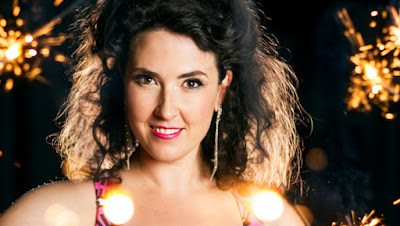 Tessa Waters is a comic volcano; firing hot balls of joke magma at the audience, while they run screaming for their lives. Wait, that’s a terrible metaphor. Things are rumbling under the surface and you never know when she’ll find that point where the audience will cross from silence to erupting with laughter. Yes, better.

Multiple shows I’ve seen at this Festival have joked about the upcoming Apocalypse, since the world is feeling on the brink of war or collapse. Tessa is worried about the children running the United States and North Korea pressing the nuclear button, partly because of the fallout, but mostly because she’s not sure what her role is in a dystopian future. She’s not good at woodwork and she’s worried you’ll want to eat her first. Especially her delicious thighs.

Volcano is Tessa pitching her various talents in an effort to prove she’ll be worth something once the bombs drop; she can keep everyone’s spirits up. Tessa is a woman of many talents; she’ll make you laugh as much from a joke as from physical gyrations or simply hiding her face in the corner. There are team games to get the audience involved; if the audience are fighting among themselves, at least she’ll live to joke another day.

She’s also an epic storyteller and that’s what we’ll need once Netflix and the internet no longer exists.

Get along to Tessa Waters Volcano before the end of the Festival and before the Apocalypse. No one will make you laugh harder or make you appreciate their thighs more.

Volcano is playing at the Greek Centre for the whole Festival, until April 22.
MICF micf2018