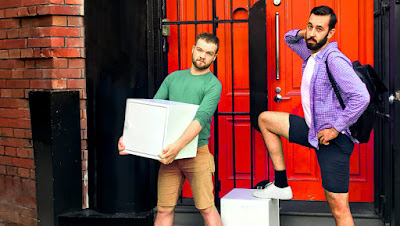 Colwyn and Filip are boyfriends and the sketch-comedy duo, Woah, Alyssa! After a couple of years on the Melbourne Improv scene and as part of another sketch comedy group, the couple have devised a show for themselves which they have already toured to Adelaide Fringe and Fringe World in Perth.

This is a fine debut for the pair, jumping from silly puns to physical humour to sharp satire. The boys push themselves, where even in two-hander scenes, they’ll jump into playing a third, fourth or fifth character that liven things up.

The opening sketch about the history of same-sex kisses on television should work better than it does, but perhaps they were shaking off nerves because they grew in confidence as the show progressed. Soon we are introduced to recurring characters: Barbara Binks, an over-the-top talent agent, and her assistants Paxton and Kroffner.

One of the smartest writing choices these boys have made was to connect the sketches with these three central figures and to build an ongoing narrative. This seemed to increase the urgency and hilarity of most of the situations, because the audience was getting the know the characters as the show progressed.

The sharpest piece of satire is the interview with Sir Michael, an actor who has made his career playing a female caricature named Velma Fanny. It’s one of the many digs the show makes at dated humour and how much sketch comedy, film and television have changed over the decades.

My absolute favourite part was the scene where Paxton is late to meet his friend at a bar because he’d been at rehearsal. Then it turns out, he was just rehearsing an argument with his boyfriend… and the scene rolls on from there. Hilariously clever.

The title Woah, Alyssa! 1 confidently suggests this won’t be the only time we see this pair on stage together, which is great. They have a strong script and after a slightly shaky start, the show kicks into high, hilarious gear. I expect they’ll get stronger over the season. And I look forward to Part 2.

Woah,Alyssa is at Hares & Hyenas this week and then Cage Me A Peacock from 16th to 22nd April.
MICF micf2018