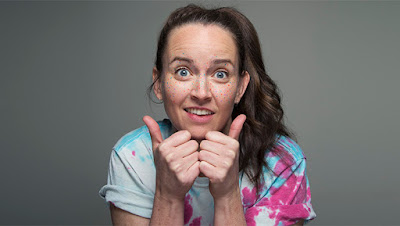 Zoe Coombs Marr is best known in comedy circles for playing Dave, an old-school misogynist male stand-up comic. She was so good at it, the last time she brought Dave to the Melbourne Comedy Festival she won its highest honour, the Barry Award. Playing a male comedian has done wonders for her career.

And the jokes about being a lesbian in her early thirties (everyone is offering to help her and her girlfriend get pregnant) and about all the funny stories her family thinks should be in her show (and subsequently end up in her show) are hilarious. Zoe could give us fifty minutes of personal, observational comedy for her specific point of view.

But Zoe is struggling with stand-up. She took on the persona of Dave because she didn’t feel safe in comedy clubs and she didn’t feel supported. What’s a comedian/performance artist/theatre-maker to do? Is she going to fall back on call-backs or rely on digital media to give us her perspective of the audience? (She sees us every night, after all. We're all the same. The audience is the longest relationship she’s ever been in, she admits.)

Late in her previous show Trigger Warning, Dave brought out his “angry feminist character” named Zoe Coombs Marr. Now she’s sloughed off the Dave persona, she stands proudly in front of us, telling us jokes, but wrestling with the medium she loves and hates. And we’re better off having witnessed the battle first hand.


Zoe Coombs Marr is a Bossy Bottom at the Town Hall until April 22nd.