Holy Cow! by the Bloomsday in Melbourne committee – Fortyfive Downstairs 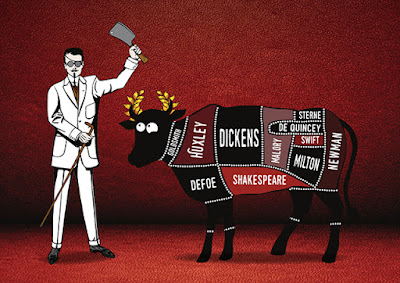 June 16th is Bloomsday, named after Leopold Bloom, the central character of James Joyce’s novel, Ulysses. Bloomsday celebrates Joyce’s life and groups all over the world come together on the date the novel is set to honour the man and his magnum opus.

Bloomsday in Melbourne has been convened annually since 1994 and every year it constitutes a seminar, a lunch and a theatrical presentation. In previous years, the original plays designed by local Joyceans, have been performed at Trades Hall, the State Library and – as with this year – at Fortyfive Downstairs.

This year’s play, Holy Cow! is based on the fourteenth chapter or episode of Ulysses, “Oxen of the Sun”. In the novel, Bloom is visiting Mina Purefoy in hospital where she is about to give birth. While he waits, Bloom reflects on the birth of his children. He meets a man named Stephen who has been out drinking with his medical student friends and they are more interested in talking of sex and fertility and abortion than reflecting on the miracle of childbirth.

The shape and content of the chapter spill out onto the stage under the direction of Jennifer Sarah Dean, who keeps the action moving joyously throughout. Joyce’s notoriously difficult book is particularly dense in this chapter, where the writer attempts to discuss the entire history of English literature. This production takes on the huge task of translating this concept to the stage and it succeeds in a wild, gloriously messy way.

The central story of Mina giving birth is protracted, while the men wait and tell stories. In this play, they are dictated to by the voice of James Joyce (played by Eugene O’Rourke OAM). As he announces another writer, costumes are pulled from large metal trunks, props are dragged on and off the stage, chairs are sat upon or upended and many, many drinks are consumed.

The ensemble cast each get their moments to shine in amongst the mayhem, with each scene or sketch building upon the last to create a whirlwind of drama, passion and comedy. Not every moment works but the sheer force of commitment in the production builds to a satisfying conclusion.

The two narrators, May Jasper and Paul Robertson, guide the audience into the world and do some hand-holding along the way. Dressed as a nun and a priest, their antics set the comic tone of the piece early on and continue to buoy the production – particularly as the energy flags a little around the halfway point of the show.

Bridget Sweeney plays an array of supporting characters throughout the show, properly stealing focus each time she comes on stage as a nurse or landlord or – of all people – Donald J. Trump.

The promotional material promises a show where James Joyce slaughters the sacred cows of English literature. In a world where parody and satire have taken a beating, this can’t feel as transgressive as it might have when the novel was first published in 1922. But as an adaptation of this one particular chapter, it brings the work to a wider audience with enough in-jokes for the Joyceans in the audience to be truly delighted.