“Spies in our own lives”: THE AMERICANS ends as Russian tragedy

SPOILERS for the final episode of The Americans

After six seasons, the Cold War spy drama The Americans finished its run in May. Set in the 1980s, the show is about a married pair of Russian deep-cover agents living in America. It found a way to delicately balance thrilling stories of espionage with captivating meditations on marriage and raising teenage children.

Philip and Elizabeth Jennings (played by real-life couple Matthew Rhys and Keri Russell) and their kids, Paige and Henry, live in the suburbs of Washington D.C. In the first episode, Stan Beeman, an FBI counterintelligence agent, moves in next door. How well does anyone know their neighbours?

The premise is simple but the series got increasingly complex over the years, built on tensions both political and personal. As with any marriage, Philip and Elizabeth have their ups-and-downs at home and on the job. Living multiple lives takes its toll on a person and as the 80s wore on, it became harder for the couple to keep their secret or agree on the ongoing strategies for helping their homeland.

In a recent interview on the Scriptnotes podcast, which focuses on screenwriting, one of the producers of The Americans – Stephen Schiff – said of the show: “All of us are spies in our own lives.” For the writers, that was the key theme that informed the ongoing writing of the series.

The show is as much about Philip and Elizabeth’s marriage as it is about spycraft and espionage, but the series is concerned with the verisimilitude of both. The writers are as focused on the emotional character arcs as they are with recreating 80s technology or Styrofoam containers from McDonalds.

“Spies in our own lives” speaks to the idea that we often conceal things we don’t want other people to know about us, and the idea we might dig around trying to uncover truths about other people. Schiff goes on to say – "Another thing about a spy is that a spy has a cover. And maybe many covers as our spies do. And you're presenting that cover to the world... And I think something that we really try to feel in our show is what's it like to be inside the cover."

Week to week on the series, Philip and Elizabeth have goals to achieve, secrets to uncover and people to watch. But an equal part of their job is to wear many disguises, become other people and keep their dominant pseudonyms as parents and travel agents as unassuming as possible. The stress of the job and their lies wear on each other and their marriage and by the end of season three, it begins to impact their daughter Paige, as well.

Other, lesser shows might have had FBI neighbour Stan closer to the truth about Philip and Elizabeth earlier on. They might have upped the stakes prematurely, putting Paige and Henry in danger more often. For a show that had visceral moments of shock and horror (a body disposal in early season three was particularly difficult to watch and listen to), it was admirably restrained for much of its run. Its fifth season was criticised for being too slow, but in hindsight it was taking its time setting up its sixth and final season. 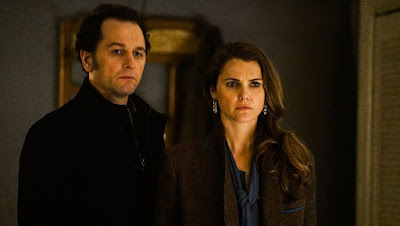 Creators Joel Fields & Joe Weisberg have talked about having an ending in mind since the end of season two. After the fourth season, the show was given two more years to plan and plot its finale. In a series focused on Russian spies pretending to be Americans, who have a kill or be-killed attitude, it was hard to see what a satisfying resolution might be.

From the recent precedents of shows focused on anti-heroes that were outright villains, do you kill your protagonist (Breaking Bad), let him escape (Dexter) or leave the resolution ambiguous (The Sopranos)? Fittingly, The Americans final season took some inspiration from Russian theatre and literature – twisting one and digging deep into the other.

"One must never place a loaded rifle on the stage if it isn't going to go off. It's wrong to make promises you don't mean to keep."

For much of the final season, Philip is out of the spy game, trying to make a legitimate go of his travel agency. Meanwhile, Elizabeth is effectively doing the work of both of them, taking bigger risks, striking out more often and getting worn down by exhaustion and conflicts within the KGB.

In the first episode of year six, Elizabeth is given a cyanide capsule hidden in a necklace she is to wear. The missions she is sent on become increasingly dangerous and the pill hangs around her neck as a portent of doom.

It’s as clear a case of Chekhov’s gun as you can get; it’s placed on the wall in episode one and we’re waiting for it to go off all year.

Surprisingly, as Philip and Elizabeth plan to flee the country in the final episode, the couple cast off the fake passports and rings of their American life – and Elizabeth drops the capsule and the necklace into a hole in the ground. The gun never goes off.

But it’s end game now. The pair have decided to leave Henry behind, hoping he is able to remain safely in America, and flee to Russia with Paige. Stan has discovered their true identities, but he’s a broken man and can’t bring himself to shoot them in cold blood. Besides, Philip drops one more bombshell before he leaves, Stan’s girlfriend might be a Russian agent, too.

The plays of Anton Chekhov are often about Russian upper-classes struggling with their sense of a changing world. They’re bleak in the way the final scenes of The Americans are – a feeling of desolation and isolation hang over the character’s lives. And while Chekhovian characters are worlds away from Philip and Elizabeth Jennings, the tragedy is they must live with themselves and the consequences of their actions.

Only a few episodes before the finale, I pictured the ending of the series much differently. These characters have committed murder in the name of their country and while Philip had tried to extricate himself from that life, Elizabeth was plunging deeper and deeper inside. For her, any disloyalty against the KGB was traitorous; there was no sense she would want to embrace an American lifestyle.

I had imagined a showdown between the couple. I had imagined a gunfight with Stan. And while the show often undercut my expectations, after six years of build-up, it wouldn’t have surprised me for this show to end in a cathartic bloodbath.

But as with the tragedies of Chekhov, the damnation for Philip and Elizabeth is they flee to Russia and must live – their children left behind in America.

In a tense scene late in the episode called “START” (named after the Strategic Arms Reduction Treaty), the Jennings are subjected to passport checks on a train crossing the Canadian border. Philip and Elizabeth aren’t discovered, but as the strains of U2’s “With or Without You” rise, Paige is seen alone on the platform – having chosen to leave the train, perhaps hoping to reconnect with her brother. It’s a devastating moment for both her parents and Elizabeth’s façade cracks. Have we ever seen tears in her eyes before?

The long final sequence has the couple travelling through frozen wastelands of Eastern Europe, eventually being met by a KGB agent who is on their side, transporting them back to Moscow. The rock music of the west is left behind and the sounds of mournful string instruments score their return to a place that they fought for over many years as The Americans.

Philip and Elizabeth are no longer deep-cover agents in America but they will spend the rest of their lives digging for clues in their own pasts, hoping they raised their kids right, forever spies in their own lives.