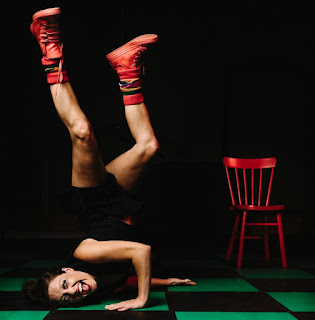 Torch light cuts through, swinging wildly into the space.

Out glides Lucky, an angel, who always finds the silver lining because she lives on Cloud Nine.
Lucky is a guardian angel, it turns out. Helps human beings while they are being human. And she’s had her eye on one particular human being, Andi Snelling.

Andi plays Lucky and later we hear about all the tiring platitudes she’s heard over the last three years, since her previous Melbourne Fringe show, Déjà vu (and other forms of knowing). “Lucky you don’t have cancer” was a particularly unhelpful bit of wisdom.

Andi suffers from Lyme disease, which has brought on many food intolerances, and bouts of weight loss and weight gain. This has led to an inability to perform, which is her passion and her life. If she can’t eat and is always exhausted, getting onto the stage has been impossible, until now.

Happy-Go-Wrong is the story of her struggle with her invisible disease, with people’s unhelpful suggestions, and with the mainstream medical community’s reluctance to even treat Lyme disease as an actual illness.

And it’s a show about Andi being back on stage. Andi has made three solo shows now. Her first, #DearDiary, was about her past. Déjàvu about the present moment, and premonitions of the future. It was around the time of her second show that she got her diagnosis.

Happy-Go-Wrong is an extraordinary feat of physical storytelling about the intervening years and the future that actually lies ahead for her. We watch Lucky skate and Andi run on the spot. Her impeccable physical control shows her body contorting in discomfort and pain as the disease begins to mess with her body and her mind.

The extraordinary thing about Happy-Go-Wrong, though, is that while it’s specifically about Andi, it’s also about a wider world of people suffering from invisible illnesses. People look at Andi, even knowing how she struggles, and say “you look well” and “it’s good to see you smiling”. And you wonder how often you might have patronised someone with a well-meaning greeting, forgetting how complicated a person’s life may be.

“How are you” is a throwaway these days. People greet each other with this instead of just saying hello. They say it without really wondering how someone is – and Happy-Go-Wrong exposes the truth of this microaggression.

Andi will make you laugh and cry and see her and the world a little bit differently. She’s back on stage and that’s brilliant but it’s also tough. Applaud her but remember that getting back on stage doesn’t mean everything is okay. It seems like a step back to her old life but it’s really another step forward, forging a path into a new world.

Happy-Go-Wrong is sold out this weekend and plays at The Burrow as part of the Melbourne Fringe until September 29th.
fringe2019 melbourne fringe