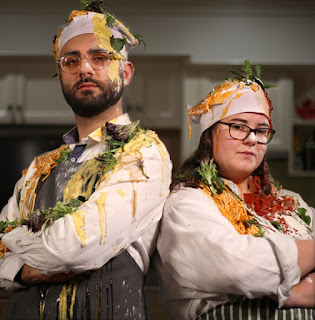 Jamie Oliver’s 30-minute meals are an effort to get people cooking healthy food even when they think they don’t have the time, with the demands of working a forty-hour week, looking after kids or indulging in extra-curricular activities.

I Still Haven’t Found What I’m Cooking For is a concentrated, pressure-cooker of an experience for a different Fringe performer each night. Produced by Stage Mom, it’s like Masterchef, but as the contestant tries to make one of Oliver’s 30-minute, three-course meals, they are interrogated on their personal beliefs and the state of the world they live in.

The night I saw the show it was Lou Walls in the spotlight and she was the perfect first-night contestant. She had to cook a risotto, prepare a salad and serve up four individual cheese cakes. And there was a timer on the wall, counting down every second.

Celebrity chefs and self-help books promise we can have it all, but how well can we make a three-course meal every night when the world is a mess and we have pressing things on our mind about the future.

Lou Walls was a very good sport, firing back witty and honest responses while trying to keep a risotto from sticking to the bottom of the pot and the pine nuts from burning. The audience kept the pressure on, yelling out the remaining time at five-minute intervals, and occasionally being able to ask questions themselves.

This show was a hell of a lot of fun. It will change every night, both the performer who is put on the spot and the recipes they have to whip up. The audience has a chance to try a mouthful of each dish at the end of the show, but you can politely decline that if you’d like. You can still score the performer out of ten in various categories and the results are posted on social media the next day.

A cooking show parody in the kitchen of a real house is a classic Fringe concept. It’s a high-wire act all around and I could see it going up in flames if the performer feels the pressure too much. But Lou Walls was as funny as could be expected under such wild circumstances.

I Still Haven’t Found What I’m Cooking For is on until September 29th.
fringe2019 melbourne fringe