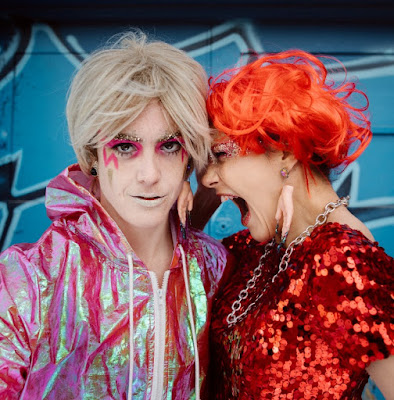 A woman walks up to a door marked PULL and she pushes.
A man tells her that she needs to PULL instead of PUSH.
“I know that. I’ve been reading since I was four. It’s a joke,” she says. Can’t he take a joke?
The man mansplains how doors work and how much happier she’d be if she’d just PULL.
So, the woman pulls off her skin, revealing new layers – she’s an alien – and she destroys the door with her tentacles.

Welcome to Just Us Girls by Ellen Grimshaw, an absurdist avalanche of observations about women and the patriarchy and its changing rules and shifting sands.

Ellen plays an alien, it seems, who meets a man (Dick Shit, played by Alice Stewart), an amalgam of all the worst white cis men Ellen has talked to in real life. Early on, Ellen’s alien repeats everything she says because she’s so used to not being listened to, she thinks she has to say everything twice.

“I’m surprised people are listening now, so it’s a hard habit to break,” she tells The Man, who explains there is really only nine different women in the world. Or perhaps just one.

There’s a lot going on in Just Us Girls, which is a dizzying combination of clever world play and energetic, fast-paced choreography. The laughs are often tinged with feelings of anger or sadness at the world, but the dance breaks help the truths hurt less.

Ellen’s writing is sharp and truthful. There’s a beautiful monologue about taking her heart and papering the sky with her favourite colours, even though she has to walk across broken glass to make it happen. The combinations of real-life conversations with her wild imagination and a willingness to try anything at script level is really thrilling.

The direction of the show is tight with a shape and tone that helps keep the material from feeling didactic. Ellen and Alice bounce of each other, a charming pair of actors that bring a lightness to the material that could really be brought undone by playing it too heavy.

Just Us Girls is an important show about minorities and equality. But it’ll leave you laughing and tapping your feet as much as it leaves you feeling despair. It’s absurd because the world is absurd.

Just Us Girls is playing as part of the Melbourne Fringe until September 29th.
fringe2019 melbourne fringe