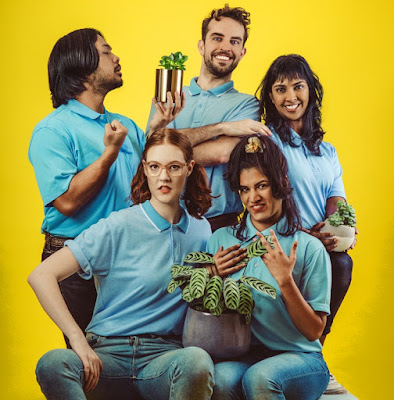 A group of unnamed people, uniformly dressed in red and pink like a cult, greet each other with “Hail Satan!” – the same way you might say hello or good morning to a stranger when you pass them on your morning walk.

But are they a cult or are they a generation with similar needs and concerns, trying to find connection in an increasingly bizarre world? And what is the best way to form a connection these days? Recount your dreams? Talk about Gilmore Girls? Offer them an Allen’s Snake to eat, even if it’s unethical?

Kirby Medway’s play is a comedic dreamscape that bounces from person to person to Satan, playing out vignettes that are odd and sweet and strange and hilarious. Directors Jean Tong & Lou Wall keep things tight and flowing smoothly, though the transitions between scenes felt a little repetitive as the show went on.

The pineal gland is a part of the brain that regulates sleep, so taking it away would produce restlessness or sleeplessness and increasingly bizarre visions and dreams. The actors mostly underplay the oddness, which makes each moment funnier, but they are bold enough to take things over-the-top when the text demands it.

Lou Wall appears as Satan and, as the devil tends to do, steals the show in her horns and tracksuit and sharply pointed black nails. Satan, just like her followers, is a bit confused with the world right now and that’s a sharp comic creation which made the show sing.