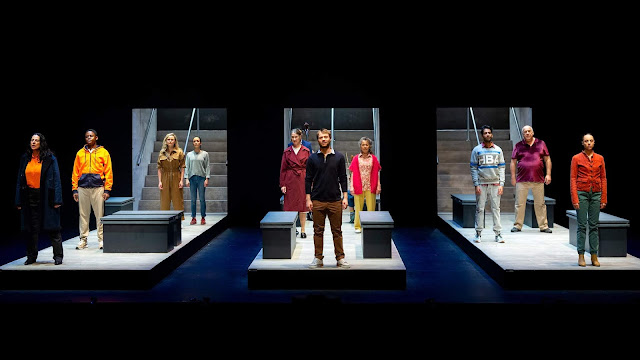 "The train moves forward and he is still, he allows the machine and its engines to carry him. He is listening without hearing, watching the world without seeing it." - Barracuda, Christos Tsiolkas

The train network in Melbourne is a web. It circles the inner city and spreads out like tendrils into the suburbs, creeping further and further away from the affluent centre. But as a public transport system, it is a great equalizer, bringing people from all points of the sprawling metropolis together. Sometimes too close for comfort. Interaction leads to reaction. A catalyst for drama. A spark for the fire next time.

Twenty-one years ago, four playwrights and a composer collaborated on a seminal piece of Australian theatre, Who’s Afraid of the Working Class? It was written for the tenth anniversary of the Melbourne Workers Theatre, a company now defunct but never expected to last much past its origin point, putting on plays in the Jolimont railyards.

Reeves’ Bonnie & Clyde-style comedy about an exploited 7/11 worker trying to get the money he’s owed is farcical but grounded in the reality of casual and part-time workers being exploited with unpaid overtime or compromised working conditions.

Cornelius pens a story titled Terror about a woman suddenly facing economic anxiety coming face-to-face with the housekeeper she employed by never really knew. It’s frank and poetic and uncomfortable and full of empathy for the women and their situations, while acknowledging the privilege the once-wealthy white woman still has.

Throughout Tsiolkas’ career, he has tackled class and race, and here he writes of a colourful group of Brothers & Sisters coming back together after many years; children of one mother and four different fathers. The conceit of each father being from a different ethnic background – white, Indigenous, African and Arabic – feels a little bit neat, but he writes such clear characters and such compelling dramatic action that you can forgive the convenient set-up.

Bovell’s chorus of commuters slowly pulls the threads of the other stories together, ever-tightening across the network, where there’s one thing that draws a disparate group of people together – the frustration of a delay. But what is out there on the Alamein line? The Frankston line? The Mernda line between North-cunt and De-Preston?

Irene Vela’s piece, Resistence, is an evocative score that alludes to buskers but heightens some of the inner-carriage, inner-city tensions throughout the play.

Fourteen actors on stage bring a wild array of characters to life across all these stories. They are mostly playing “types” – the kind of people you see in public and perhaps make assumptions about, but there are a few times the performers get to dig a little deeper.

Maria Mercedes’ character in Tsiolkas’ piece has a memorable moment with her husband in Greek, later replayed in English for the full effect, even though you might have been able to guess what she was saying.

Osamah Sami has a couple of memorable characters, even bringing some empathy to an authorised officer who is trying his best just to do his job.

Eryn Jean Norvill is a chameleon, as always, bringing to life at least three distinct characters, traversing the dramatically different tones of the different writers’ works.

While I would have preferred if the writers had pushed past these “characters as types”, the stories they told evoked a Melbourne I recognise and have experienced. At least from the perspective of having seen these kinds of people on trains.

From the shared experience of a train stopping in the middle of the line without knowing what’s happening to over-hearing racism or seeing violence or being uncomfortable around people clearly under the influence, this show knows Melbourne. Captures it.

Under the surface, crowds jammed together, hurtling from the outer-suburbs into the city, their concerns are similar – even if “economic anxiety” means different things to different people. Even if “this is my country” sounds different, feels different, depending whose mouth it is coming out of.

The concerns of Anthem are much the same as Who’s Afraid of the Working Class. Not much has changed in two decades. But the stories aren’t quite the same. The cast is more diverse. Reality seems more complicated in 2019. And the writers are now some of the leading arts practitioners in this country.

This is a bold, layered, cerebral work that made me think and made me feel things viscerally but kept me at a distance emotionally. Or perhaps that’s because I was sitting up in the circle of the Playhouse and just felt so far away.

Anthem is playing as part of the Melbourne International Arts Festival until October 6.