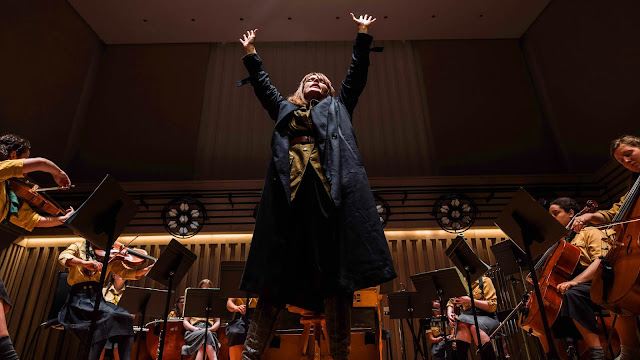 “It costs me nothing to show you everything. It might hurt, though. It does hurt.”

Nico was a German singer, songwriter, musician and actress. She recorded vocals for The Velvet Underground’s debut album and appeared in films directed by Andy Warhol and Federico Fellini.

In September 1968, Nico recorded The Marble Index, an avante-garde album full of songs memorable for her somber lyrics and the strains of her playing the harmonium. This work and the femme fatale persona she created at this time has been cited as inspiration for Siouxsie Sioux, Dead Can Dance and Bjork.

It’s also the key stimulus for The Nico Project, created by actor Maxine Peake and director Sarah Frankcom, a co-commission of the Royal Court, the Manchester Festival and the Melbourne International Arts Festival.

Peake and Frankcom haven’t simply created a biographical work about the singer, but a performance art piece that’s as surreal as Nico’s music. The title itself suggests that this is a project inspired by Nico, but not really about her.

Peake walks on stage from out of the audience, wearing a long black coat. She plugs a microphone into an amplifier and struggles with squealing feedback from the speaker. The stage is set up for a large band, but the chairs remain empty for now.

In these first few minutes, Maxine Peake appears to be herself; she may be dressed to evoke Nico but she speaks in her natural Bolton/Manchester accent while she is trying to find the character. She describes a scene of meeting Nico on a train station; Nico spent much of her later years in Manchester, at the same time as Peake was growing up there.

Eventually, Nico begins to speak through Peake, as if the actress has become possessed by the icon. As Peake explores parts of Nico’s story – growing up in war torn Germany, changing her name, leaving her son behind as she continued to tour – the chairs for the band are filled by female musicians. We see Nico in full creative flight, while wrestling with her memories and decisions.

The fourteen-piece orchestra play beautiful music and create unnerving soundscapes. Soon they are victims of war, victims of the patriarchy and we watch Peake-as-Nico struggle with anxiety and mental anguish, as the orchestra disappears, one-by-one.

The Nico Project is as much about the difficulty of capturing the essence of long-dead performers on stage as it is about the performers of Maxine Peake and Nico themselves. We are privy to an extraordinary performance by Peake, striding and weaving through arresting visions created by Frankcom, writer E.V. Crowe and designers Imogen Knight (movement), Lizzie Clachan (set), Paule Constable (Lighting) and Helen Atkinson (Sound).

I wondered if knowing Nico’s history would have helped me appreciate this project more, but on reflection, coming to the piece knowing only a name and her work with the Velvet Underground, allowed me to appreciate Maxine Peake’s performance more. I wasn’t comparing her to an icon, I was there to watch her struggling to recreate one.

The Nico Project is playing as part of the Melbourne International Arts Festival until October 19th.
melbfest2019 melbourne festival