REVIEW: The Shadow Whose Prey the Hunter Becomes – Melbourne Festival 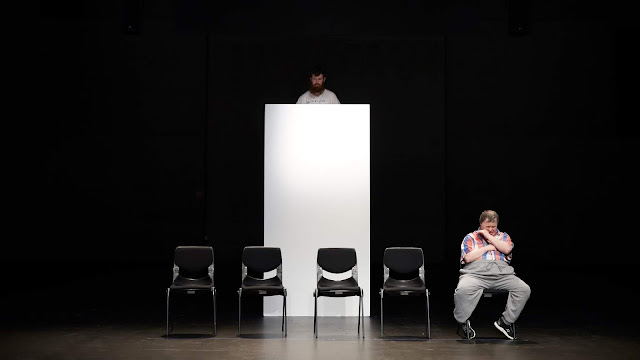 We are welcomed into a public meeting and after some confusion over which Aboriginal nation they are acknowledging, the five performers begin a long, complicated discussion about being heard, being listened to and being understood.

Geelong’s Back-to-Back Theatre works with performers both with and without disability but for their latest work, five members with intellectual impairments take centre stage. Sometimes they are difficult to understand, so there are surtitles to help the audience, text – it is suggested – that is being created live by Siri.

After the company’s previous show Lady Eats Apple at the 2017 Melbourne Festival, a show that took over Hamer Hall, The Shadow Whose Prey the Hunter Becomes is stripped back and sparse. There’s a lot going on at its core, though; perhaps too much.

The ensemble, who helped to create this piece, want desperately to be understood but hate being patronised by the illuminated translation hanging above their heads. They see this as just another form of prejudice, another way to separate them from “normal” people.

Technology is at the heart of their discussions, because as much as phones and computers and Siri are supposedly here to help, the faster we move into the future, the quicker technology takes over. Soon, they suggest, with the rise of artificial intelligence and the ever-expanding role of social media, most minds will be unable to cope with the changes. All of us will become intellectually impaired.

I’m used to Back-to-Back’s work being theatrically inventive and visually compelling and this stark work was distancing by being so static. But the words and the ideas kept me listening and kept me thinking, because these are stories and perspectives I so rarely consider. And there is something essential in the culture right now about listening to people – to women, to victims of assault, to the disabled – and hearing their stories and believing what they have to say.

This show bounces around a lot and feels less like a meeting than a brainstorming session before a meeting or as part of a creative development. I absolutely can see how these creators and performers wound their way from disabled people being abused to Gary Kasparov and Isaac Asimov and, most strangely, to Kevin Spacey and Michael Jackson. I’m not quite sure, though, that a lively discussion is inherently theatrical.

But, if you have some thoughts, I am willing to listen.

The Shadow Whose Prey the Hunter Becomes is on as part of the Melbourne International Arts Festival until October 20th.