REVIEW: What Girls Are Made Of – Melbourne Festival 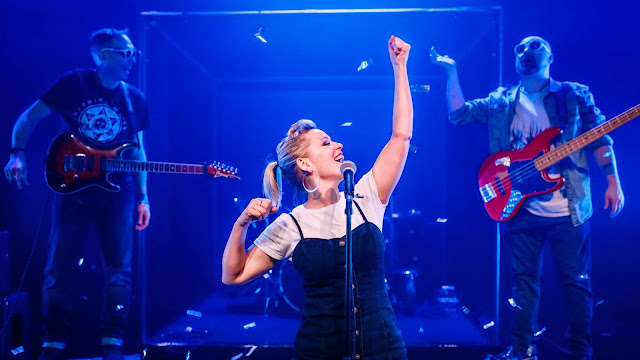 It’s 1992. Grunge is taking over the music world. But in Scotland, Cora Bissett’s inspirations are rock’n’roll women like PJ Harvey, Linda Ronstadt and Patti fucking Smith.

When Cora sees an ad in the local paper “Band Seeks Singer”, it throws her into the music world just after she’s left school. She’s not even 18 yet. Her drummer bandmate is still studying.

After only a few gigs and their song played on a local radio station, her band Darlingheart are signed to a five-album deal by Phonogram’s sister label, Fontana, and that’s when things start to go wrong.
What Girls Are Made Of is writer/performer Cora Bissett’s on-stage memoir of that time she was in a band. It premiered at the Edinburgh Fringe in 2018 and now the production has been flown across the world to be part of the Melbourne International Arts Festival.

It’s part-monologue, part-rock show, with three bandmates to support her, on drums, bass and as various characters in her life – her mum and dad and manager, mostly. Occasionally we’ll hear about Cora’s brushes with fame, touring with Radiohead and partying with Blur, just at the BritPop phenomenon is about to take off.

Behind the story of the band that didn’t last very long, which hits all the points you’d expect in a story about the music industry (sex, drugs, dodgy managers), the most affecting parts are those about Cora’s relationship with her parents and a later story about her trying to become a parent herself. Cora Bissett was forged in the fires of her youth – and the fallout from those early experiences have informed all her choices since.

The show is a lot of fun. Cora’s style is easy-going and her singing voice is strong, as she covers the songs of her feminist rock heroes. I would have liked more of an explanation of how exactly her later life had been changed by the story of Darlingheart; how did she travel from there to being a writer and director working at the National Theatre of Scotland.

What Girls Are Made Of is full of memories of youthful exuberance, tarnished by reality and time. There’s a lot to love in there, but it didn’t quite hit the heights it probably should have. Just like Cora’s band, I guess.

What Girls Are Made Of is on at the Melbourne International Arts Festival until October 13.
melbfest2019 melbourne festival