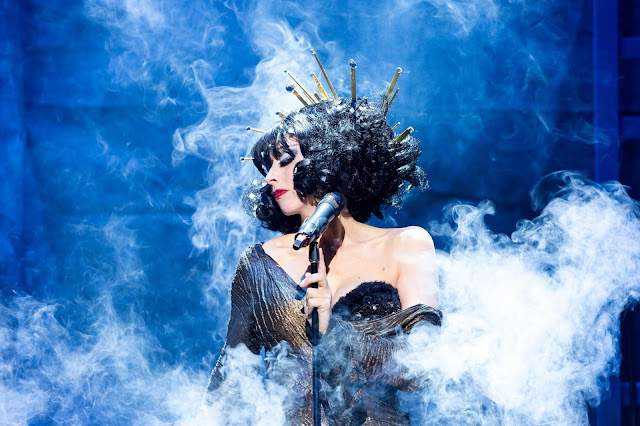 Meow Meow is trying to find somewhere to birth her new Christmas show. There’s no room at the Royal Albert Hall or the Sydney Opera House, so the old brick building on the Southbank in Melbourne will have to do. Apocalypse Meow: Crisis Is Born is Meow Meow’s holiday show that was original commissioned by the Southbank Centre in London in 2014. Now it has finally found its way to Melbourne and it’s not even Christmas. It is an early Christmas present, though.

Meow Meow is such a singular presence on stage, she will outshine everyone when appearing in shows not of her own making, but when it is her own show and you’ve seen her before, you know what you’re getting yourself into. A self-described gargantuan performance artist, her singing is sultry and smooth – she will have you laughing one moment and moved to tears soon after.

If you think this all sounds a bit heavy for a Christmas show, you’re right, but you’re probably forgetting you’ve been disappointed by Christmas before. Sometimes the best laid plans go awry, crisis is born and you just have to make do. You can trim a tree, invite carollers into your home, sing songs of the season and get snow in your hair – but sometimes that’s not enough.

It’s always hard to describe a Meow Meow show, but this one in particular is playing on the idea of surprise – one of the key elements of the Christmas tradition. I don’t want you to know what’s under the tree, wrapped perfectly, with a bow on top. Just know that you’ll have a good time but sometimes, occasionally, Christmas dinner isn’t all it’s cracked up to be. Especially if you’re an orphaned Dickensian caroller.

Apocalypse Meow is on at the Malthouse until Dec 1st, just in time to really celebrate the season.