“Twelve years inside and I’m still not free. Not properly.”

Lorraine is just out of prison and she’s dropped in on Marie, who she met and got to know while they were both locked up. She’s thirsty. Parched. Unsettled and unsettling. She can’t sit still.

Marie has been out for a while and seems, at first, to have found her feet. She’s looking fresh-faced and has shiny hair and she might be living in a studio apartment, but she knows that’s just a fancy name for a bedsit.

Playwright Chloe Moss has based her play on women she met while volunteering at a prison in England. The play touches briefly on their prison lives and only alludes to why they might have been sent there in the first place. The story doesn’t focus on life behind bars, but on life upon release – and how difficult it is for these women to re-enter society.

Marie is uncomfortable with Lorraine encroaching on her space, even as she wants to help her friend. Lorraine wants companionship, before she moves into a shelter and – more importantly – before reconnecting with her son, who was taken from her when she was convicted.

Elias Jamieson Brown’s production, in an encore season at The Burrow in Fitzroy, is an intimate, up-close, affecting piece of theatre. He keeps up the tension throughout the show, even during the blackouts, with his sound design putting the audience on edge – never knowing what we’re going to find when the lights snap back on. The audience is in Marie’s bedsit, but we’re close enough to feel like we’re trapped in a prison cell.

While the script occasionally falls into cliché – though perhaps reality bends toward our expectations sometimes, Moss’ script is elegant in its crafting of these two women and Brown has guided his actors to astonishing performances.

Sancia Robinson’s Lorraine is spiky, hard-edged and restless, but we soon understand why and even as the invading force in Marie’s life, we can empathise with a woman who isn’t sure what steps to take next. Early on, Lorraine feels like a threatening figure, but Robinson fleshes her out as the reunion with her son comes closer and closer.

Claire Sara’s Marie is a lot more easy-going, relaxed in front of her television or knocking back beer after beer after beer. We’re on her side, too, feeling every moment that she’s welcoming her old prison friend, while being uncomfortable with a house guest who is staying too long.

The longer Lorraine and Marie spend together, the harder it becomes to watch. Are they falling into their prison routines? They play a game of rag doll at one stage, which takes them back there and the sequence is more and more uncomfortable as the game drags on. Where will I find myself when the hood comes off? Which way will I be facing? Can I face myself?

I was moved to tears several times in the show, by both Robinson and Sara – seeing their tough exteriors crumble, slowly, almost imperceptibly to begin with. And when the well of emotion overflowed, without ever tipping into melodrama, it was devastating but freeing all at once.

An extraordinary piece of theatre.

This Wide Night is playing at the Burrow until December 15th. 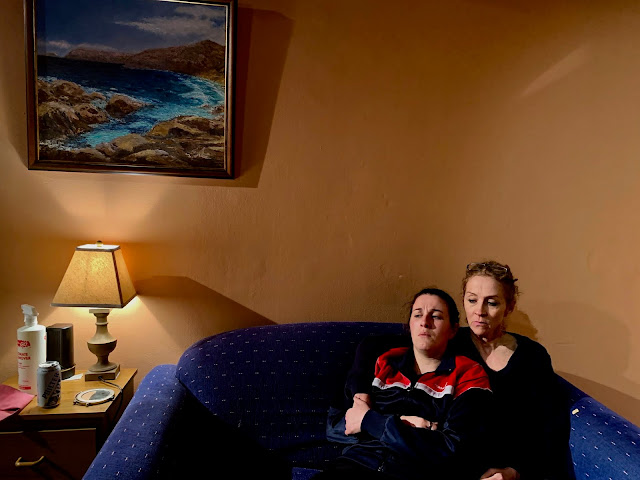