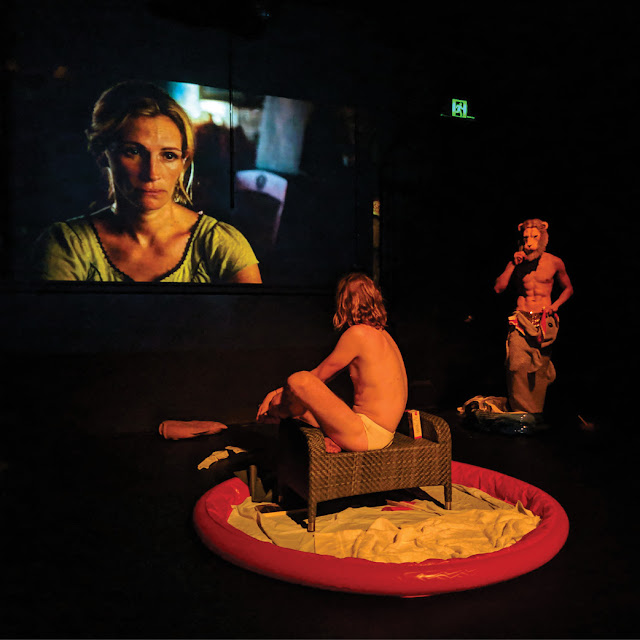 Andrew grew up in Perth but moved to Singapore, where he became a model and an actor – and a coveted very-white-man in the gay community.

Ming was born in Singapore but moved to Perth at a young age, unable to go back to his homeland, for fear of being trapped there, forced to do military service.

What happens next is a clash-of-cultures, a white boy feeling unappreciated and an Asian man being kept from his family and his history. But it’s messier than that, as history and gay sex tend to be. The spectre of colonialism remains in the form of a regressive law that makes sex between adult men illegal. And the lessons Andrew is learning are steering dangerously close to the cringeworthy novel by Elizabeth Gilbert – Eat, Pray, Love – later turned into a film starring Julia Roberts.

Sutherland and his co-writer Vidya Rajan throw a lot of ideas at the wall, scrape them off, put them in a blender, and have the traditional Singaporean symbol - the merlion - spit them out all over the stage. Parts of the show are extremely funny. There’s a deliberately awful sex scene that’s probably not the worst one in Midsumma 2020. There’s a touch of history lessons, complicated by the different lenses you might view history through.

We get to know the actors on stage and their personas quite well, even though the style of the show threatens to overwhelm us at any moment. It’s a bit like Singapore in that way, it’s wild and glitzy but it’s also char kway teow and soy milk in boxes.

Poorly Drawn Shark is strange and silly and confronting and illuminating and fast-paced. It’s a lot but sometimes that’s what you want – all the theatrical tricks and devices you can squeeze into an hour.

It's on at Theatre Works as part of Midsumma until January 26th.