REVIEW: The Feather in the Web by Nick Coyle


A woman has baked her friend a cake to celebrate surviving the year – she’s been through chemotherapy and a divorce. Her friend tries to be grateful for the gesture, but it’s clear that the cake tastes bad and –

Next thing we know, both women are smeared in cake and one has hot coffee poured all over her.

Kimberly is leaving home forever and this is her final destructive moment there. No wonder her mother is glad to see the back of her.

Kimberly is chaos and driven by pure impulse. She has no social graces and adheres to no societal norms. She humiliates and assaults a shopping centre make-up artist and he leaves her smeared with red lipstick, which she wears as a kind of war paint for most of the rest of the play.

All of the above sounds grotesque, which it is, in an absurdly delightful way. It’s uncomfortable and shocking and hilariously funny. The comedy comes from the outrageousness of every single character, slammed against their reactions to Kimberly, who is an unrelenting force of nature. You can never predict what’s going to happen next.

The tension and stakes are turned way up when Kimberly falls in love with Miles. Because of her feelings for him, Miles becomes the only person who has even a hope of controlling her. And all of a sudden, Kimberly is at his bidding – desperate for him to kiss her, hug her and fall in love with her, too.

Nick Coyle’s script is wildly anarchic and that spirit is perfect matched with director Declan Greene’s handle on camp and queerness, bringing the kind of rigorous theatrical messiness we’ve seen in his creations as part of Sisters Grimm.

The whole ensemble cast is astonishing and agile, playing a variety of characters, but there’s really no play unless you get the character of Kimberly right. Michelle Brasier is commanding from her first moment on stage. While the character seems out of control, Michelle’s performance is nothing of the sort - it’s well-judged in its mania, never allowing the ticks of the character to make her unwatchable. In fact, it’s the opposite – you cannot take your eyes off her. She’s incredible.

The Feather in the Web, as an experience, feels unrestrained because of how unpredictable the plot is. As a piece of theatre, though, it is really well made; there’s some gorgeous design work from Byranna Lowen (set and costume), Clare Springett (lighting) and Tom Backhaus (sound) and Coyle’s script is smarter than it first seems. He knows how to create dramatic tension, even as we speed through ridiculous takes on engagement parties, team bonding exercises and – worst of all – an improv class.

This is a singular experience. A wild unforgettable piece of social satire.

The play is programmed at Red Stitch as part of the Midsumma Festival. It’s a great start to the theatre company’s 2020 season and one of the highlights of Midsumma.

The Feather in the Web is out-of-control and playing until March 1st. 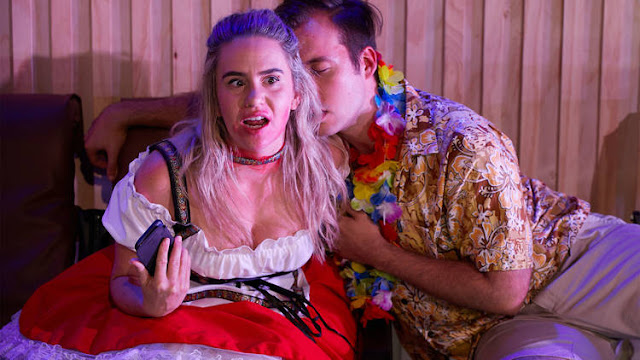