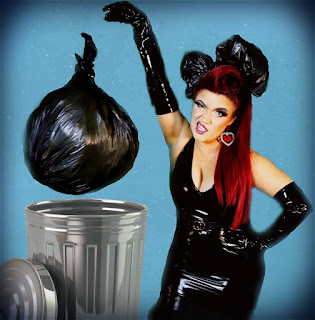 I’ve watched a lot of streamed theatre of various kinds during lockdown, as I wrote about here. And even as Melbourne slowly emerges from Lockdown 2: Electric Boogaloo, we’re still not quite ready for live theatre, so Melbourne Fringe is online for everyone’s enjoyment.

I’ve seen many of Tash York’s shows in the past, including the one she did for VCR Fest back in… I dunno. I’ve lost all sense of time. That was a fun hour of cabaret, that was only slightly affected by technical difficulties. But we’re all in this together, learning new technology and how to enjoy a public thing privately.

Tash’s brand has always been the heavy-drinking chanteuse, who parties too much and likes to eat late-night nuggets. There are always lyrical twists or complete re-writes to the songs she sings, though. “History Repeating” and “In the Mood” are reinterpreted for our times, 2020 the year from hell.

One of the regular features of Tash’s shows is her taking prompts from the audience on a theme so she can add them into songs she’s singing. Last night, she asked for things we wanted to “disappear” and what our plans are for the next five years.

Of course, in a live audience we’d shout these out. At Fringe this year, there’s a live chat function that helps with this sort of interaction, but also allows for emoji laughter and gif applause. My home office became a modern-day cabaret venue using my two monitors: show on one, chat in the other.

My five-year plan is to dance on Trump’s grave, which Tash turned into a little tango that needed a mature language warning for a 6:30 show.

During a long lockdown, though, Tash has changed a bit. She’s now a committed cat lady, with three altogether: Hippo, Batman and Aretha. She’s also become someone who goes on morning walks, and she’s “done all of Southbank” – which inevitably leads into a clever song about the entitlement of Karens. Hashtag not all Karens.

Tash talking trash is a delight, especially when she finds the treasure inside this crappy year.

Trash Talk is only making a brief appearance at Melbourne Fringe, on this weekend only. Stream it!