Returning to COME FROM AWAY 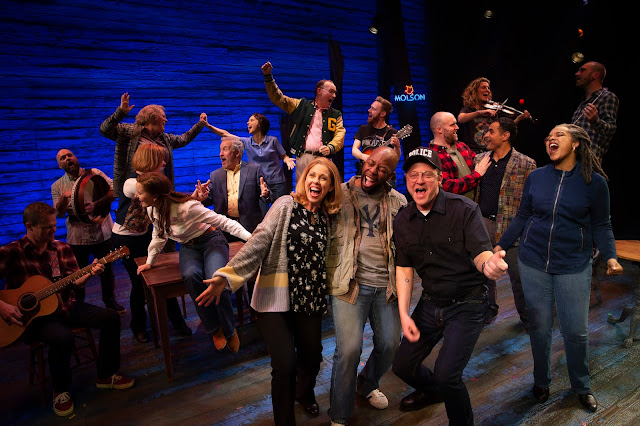 At the start of a moment

On the edge of the world…”

I first saw Come from Away on stage eighteen months ago, though I had listened to the cast recording before that and had seen a staged development reading, streamed online many years ago. Back before streaming theatre and readings was a regular occurrence. A lot has changed in the last year and a half.

When I first saw the show, it was moving and uplifting piece of history – based on the real lives of people in Gander, Newfoundland on September 11th, 2001. It sparked memories of that day, for good and bad, and reminded me of the human-interest stories from the time – from Gander itself, but also of communities all over working together to deal with the traumatic fallout from the day.

Returning to the show, as well as to large-scale musical-theatre for the first time since the pandemic closed theatres across the world in March 2020, the show felt much more present, more real and was a far more emotional experience for me. I teared up during “Welcome to the Rock” because it felt like a welcome back to the theatre after so long away.

The airport at Gander used to be the place the planes from across North America would stop on the way to Europe, back in the days before planes could fly that far without having to refuel. The airport remains, but it only sees half a dozen planes land there each day. On September 11th, it welcomed six times as many planes, holding 7000 passengers – almost as many as lived in Gander itself.

The musical tells the story of the town and some of the passengers that landed there, unable to contact loved ones, unable to keep track of the twenty-four-hour news cycle. Before smart phones; before most people had mobile phones at all. It’s a tapestry of panic, threaded together with generosity; fear stitched alongside love.

Our reactions to works of art change over time, as we change. You could watch a film every year and feel different ways about it every time. Experience changes us. Age changes us. Our views of ourselves and the world inform how we connect with people and with theatre.

The events of 2020 have coloured how I watched Come from Away the other night. Watching people trapped in a place for an indeterminate amount of time. Stories of airspace shutdown and travel restrictions. Moments where stocks of toilet paper and other necessary items disappear from supermarket shelves. Families separated. Reunions delayed. It all hits differently now.

The first time I saw the show, I watched the documentary-like musical play out in front of me, impressed by how the cast hopped between places and characters, thoroughly enjoying the theatrical trickery in front of me. I laughed and cried and sat in awe that first time, but on return, I was more deeply moved. This was the right musical to see in a room full of people, not a dry-eye in the house – a sea of damp masks throughout.

We had been without theatre for so long and now we’d come from away, sitting in that auditorium together. A shared live experience.

The production of Come from Away that is playing in Melbourne right now is the only production of the show playing anywhere in the world. It felt so great to be welcomed back, but it was also a reminder that the pandemic is not over for a lot of people. Theatres across the world are still shut. But there is hope when our humanity shines through, when people can help people even in the most troubling of times.

Come from Away is playing the Comedy Theatre in Melbourne now. I hope it can return to the world soon.