REVIEW: Because the Night – Malthouse Theatre

When Bruce Springsteen and Patti Smith wrote the song “Because the Night” in 1977, I doubt they were thinking about Hamlet and Ophelia – the song about desire and lust does not really describe the fractured couple of Shakespeare’s play. Springsteen was writing the song for himself to sing, but struggled with it until his sound engineer, Jimmy Iovine, who was working with Smith at the time, introduced the pair. Together they created Patti Smith’s first and, arguably, greatest hit.

Theatre, as with song writing, is hugely collaborative, even if we often elevate singer-songwriters and playwrights above the rest of the creative collective. Immersive theatre turns up the viscerality in all areas of the experience of watching a performance. You’re closer to the actors, the sets, the lights and the sound. You’re within a world where you can appreciate details you would never see on stage: drawings, notes, letters, photographs, the feel of dirt on your hands, the crunch of bark underfoot.

And so we step into Elsinore, a logging town, where Claudia has been fucking Gertrude and Hamlet is mourning his dead father. And there’s something mysterious happening in the woods.

Because the Night is the first production by Malthouse theatre since it was shutdown by COVID in 2020. It’s a collaboration by a dozen artists behind the scene and two rotating casts of six actors. 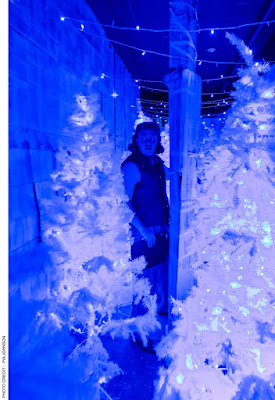 There’s an audience of 60 at each performance, who are divided up into three groups, starting in the Bedroom, the Gymnasium or the Royal Office. Each group watches an opening scene – I was with Ophelia in the Gymnasium, as she trained with a knife; her victim, a block of wood from the woods surrounding the castle. And then the audience is left to explore the space. Rooms of all shapes and sizes. Long corridors. And all those details you would never see on stage.

The text, by Kamarra Bell-Wykes, Ra Chapman and Matthew Lutton, uses Hamlet only as a foundation. The audience recognises character names or understands their familial relationships, but can’t use Shakespeare’s play to map out their journey or the narrative thrust. Not quite. Claudia is a gender-swapped Claudius. Ophelia seems to have plans of her own. And while Hamlet’s whining is reminiscent of the original, this time he doesn’t seem suicidal.

Is there an analogue to the “to be or not to be” speech that I missed? I won’t know, unless I go back and follow him all night. Khisraw Jones-Shukoor’s Hamlet strut and fret his hour-and-a-half upon the “stage”, but I only saw moments of his magnetic, angry performance. And on another night you might see Keegan Joyce instead.

I watched Hamlet with Gertrude in her bedroom, seated next to the bed, as the plan for a duel unfurled. After Hamlet left, I stayed to watch Belinda McClory because if you have the chance to watch an incredible actor do what she does best in close-up, why not take a moment to sit in silence and observe? McClory’s stillness and poise belie the turmoil underneath Gertrude’s surface.

I followed her to a dismantled throne room and I thought this was a personal one-on-one performance, only to find out later that someone else I knew was watching from the other side of a two-way mirror. Listening and observing from the shadows is an important part of Hamlet and to be able to do it yourself – watching audience members who don’t realise they are being observed – is another in a long line of visceral thrills in a show like this.

Just as Bruce Springsteen’s Because the Night is nothing without Patti Smith bringing it fully and finally to life, this Malthouse production is nothing without the work of the designers. The set design makes it feel like you are there. There are no corners cut here. I have seen immersive works before where the hallways were just black curtains; here the corridors are painted bright blue, with brass lighting fixtures lighting the way. Each room is a world of its own; some of them feel like logical progressions from the last room you visited and others are disjointed and nothing like you expected. 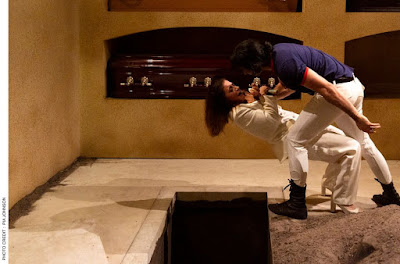 I’ve loved Marg Horwell’s set designs for a decade or more and to be inside a labyrinth of them is a special gift. A master bedroom covered in shiny wallpaper, heavy drapes along one wall, half covered in flowers of condolence is at one moment comforting – because you might expect this in Hamlet, but the longer you stay there, the more off-putting it is.

The royal office is imposing tall ceilings and a staircase to nowhere. The gymnasium feels like a gymnasium. But the more you look, the more you find. Rooms behind mirrors. Corridors behind corridors. A games room. And a grand old woodshed, with rusted corrugated-iron sheets and bark strewn across the floor.

The audience are silent observers, dressed in cloaks and rabbit masks, as if ready for an arcane ritual out in the woods. There’s a mystery happening in the rooms, of course, each man and woman with their own agenda. But the presence of a forest surrounding the castle is felt in timber-lined rooms and carvings. If the people inside are making their own plans in here, what is happening out among the trees? You might only know by reading a post-it note or a hastily-scrawled warning letter. And what’s with all the pigs?

Immersive theatre is performance and art installation and story all intertwined. Maybe you’ll enter Because the Night looking for Shakespeare or a reference to Patti Smith, but what you need to be open to is… everything else. Because you cannot see everything; I only saw Polonius briefly once before the bows at the end. And you may not even find every room. But as with all art, the experience is a reflection of you. Enjoy the set design and J. David Franzke’s unsettling composition and sound design. Stand uncomfortably close to actors and go through doors alone.

Because the night belongs to lovers

Because the night belongs to lust

Because the Night belongs to each audience member that chooses to immerse themselves. Your experience of it will be unique. I found it mysterious and captivating. Go see it for yourself.

Tickets are on sale through May and the show is planned to run for the rest of 2021.