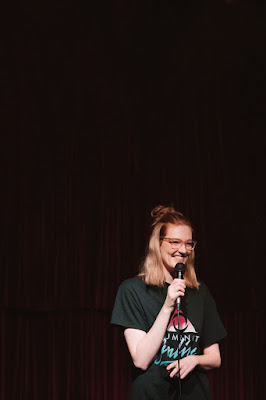 2020 was a weird year for everyone and Lou was not coping. They spent some time in hospital and they joined the Illuminati. I mean, with all the downtime they had, what else were they expected to do? Write King Lear or something?

In amongst the global pandemic, people seemed to be attracted to conspiracy theories more than ever before. In a time when QAnon threatened to affect the results of the US Presidential Election, Lou seeking out the truth of the modern-day Illuminati seems almost rational. I mean, they have – allegedly – been around for hundreds of years, there must be something to it right?

Joining Lou on their journey, mostly delivered in song, is a wild ride. From diving into dozens of Facebook groups and Reddit forums, to a five-month-long conversation with Deborah, who welcomed her to the light of knowledge, you can’t help but see why people are attracted to enlightenment. I mean, it would make sense if Queen Elizabeth was a lizard person, right?

Lou’s stage presence is welcoming at first, but there is so much happening in that brain of theirs, you might feel like you’re being dragged along or having a hard time keeping up. But that’s the fun of the show; we bounce around from a date with a 75-year-old in Box Hill South, to an anti-vaxx rally in the Carlton Gardens, to the Illuminati Hair Salon, to Justin Beiber singing “satanic new world order” backwards on one of his albums.

Lou’s songs are clever, too. Rapid rhymes and other lyrical flourishes make this more of an off-beat musical than traditional stand-up. It’s the perfect way to make endless Facebook conversations with Deborah sing, rather than feel like the out-of-control ravings of a troll farm grifter. Which, of course, they are.

There’s a layer of the show that digs into why people fall for this stuff, but mostly it focuses on how people use it to lure victims into scams to steal money from them. Lou gave up a handful of dollars here and there, but only enough to keep Deborah on the hook, desperate to find out the truth.

The One Time I Joined The Illuminati is hilarious to the point where I had to put my glass of wine down for fear of splashing it everywhere as I convulsed with laughter. It’s also a How To Guide of What To Do and What Not To Do if you decide you need the Illuminati in your life. I mean, they promise millions of dollars and sex with Deborah’s Iraqi vet cousin? You should look them up.

The One Time I Joined The Illuminati was sold out but there is one more show on sale this Sunday night. Go join the Cult of Lou Wall.