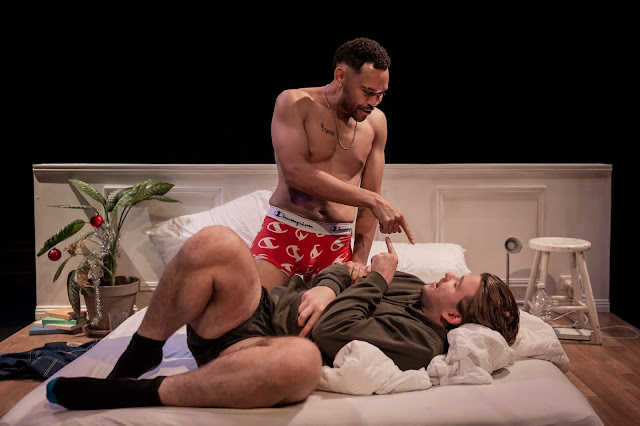 Christmas Eve. A bedroom. Two strangers, their limbs entangled; the doona cover and pillows hiding their identities just a little while longer.

Riley wakes first to chimes from his mobile phone; an alarm or an early morning text message. He carefully manoeuvres himself away from last night’s hook-up and drags himself out of bed. His family are coming over for dinner and he’s got to clean up his new apartment before they arrive.

But first thing is first, he’s got to get rid of “L” – the man he slept with last night, whose name escapes him right now in his early-morning, hangover fog.

L doesn’t seem in a hurry to leave, though. He’s checking his messages; friends are texting photos of their Christmas Eve barbeque, trying to talk him into coming over. He’s not sure he wants to. He’s also sending messages to someone in his phone known only as FUTRE HUSBND and ignoring texts from his dad.

Riley, in a haze, is trying to put the pieces together from the night before. He got wasted at his work Christmas function then took a taxi to a gay bar and… that’s where he met L. He was so drunk, he can’t remember much after that and doesn’t even know if they had sex. L isn’t being very forthcoming.

Jacob Parker’s debut play, This Genuine Moment, starts out tentatively, which puts us in the shoes – or the bare feet – of two people waking up to the morning after a big night before. It’s awkward, as these situations can be, but only Riley seems to care about what went on. L is already looking for the next thing, as he blithely checks his texts and scrolls through Grindr as he sits in his underpants on Riley’s bed. 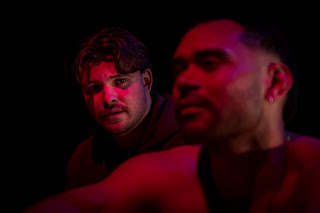 When Riley starts to open up and it’s clear that he wants to come out to his extended family that night, the play starts to wander down an all-too-familiar queer narrative path; the naïve in-the-closet gay man is reaching out to his out-and-proud hook-up to try to make sense of his feelings. He’s also got a coming out speech he wants to try out on a stranger.

The more and more these characters get to know each other, though, it becomes clear an even trickier story is unfolding before us; this is the story of the lies we tell to friends and family and even ourselves to make each day bearable.

Tom Dawson’s performance as Riley is a compelling mix of awkward, hesitant, misguided and wise. He lives and breathes every facet of this complicated character. Ilai Swindells’ turn as L is fascinating to watch, as we get to learn more about the kinds of lies he’s been telling, without necessarily getting closer to the truth. Together, the two actors are mesmerising in this 75-minute show.

There are a lot of technical cues in the production, including the projection of text messages and Insta photos on the back wall of the theatre. It threatened to slow proceedings early on (there was a full show stop called seconds into the opening night performance because of technical difficulties), but this layer of storytelling isn’t just an affectation – it really gets to the heart of the complications in these characters’ young lives.

Director Hayden Tonazzi makes clear choices in what to give and keep from the audience, while letting the actors feel free to fully embrace the complexity of these characters.

Parker’s script lulls us into a false sense of story-telling security early on and slowly pulls the doona out from under our tangled expectations of the evening. This Genuine Moment is not just a morning-after story, it becomes something of a “this is the first day of the rest of your life” tale – while never allowing for easy answers, even when they are staring Riley and L in the face.

This Genuine Moment is playing as part of Midsumma at La Mama Courthouse this week only.