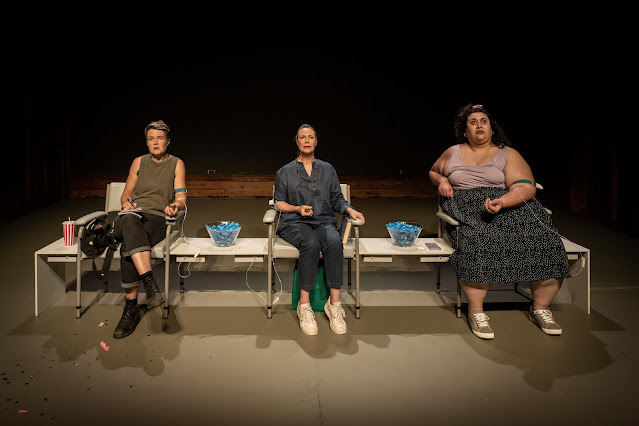 Three women sit silently, set an equal distance apart, each with a cannula inserted into their hands.

Three women sit silently, set an equal distance apart, each with a cannula inserted into their hands, donating plasma at a blood bank in Melbourne.

They are there when the audience walks into the theatre. They sit, reading a book or their phone, fidgeting as we find our seats and chatter amongst ourselves before the lights go down.

The play has already started, of course. The thing about giving plasma is that the wait is part of the experience. You cannot go anywhere. You’re hooked in.

They sit in a room surrounded by televisions, all tuned to the same network. Like donating blood at Harvey Norman. But they’ve come prepared to wait. Lou is writing in her journal. Grace is reading Go Set a Watchmen for her book club. Juice is scrolling endlessly on her phone.

Small talk starts. It’s pleasant and awkward in equal measure. You never know if other people want to talk and if you don’t want to talk, it’s not like you can leave.

Lou is a social worker. Grace used to volunteer at this very blood bank. Juice has just moved to Melbourne and all her emergency contacts are still in Sydney.

The women are just getting to know each other when… all the televisions, tuned to the same network, start showing footage of the Manchester Arena attack. Shrapnel bombs detonated as young girls and women are leaving the concert.

And now the women, giving plasma, hooked in, can’t get away or look away. Not even when the news runs out of new footage and starts playing the same images over and over again.

And now their talk is no longer small. It grows larger and larger.

Olivia Satchell’s follow up to, my sister feather, and the third in her trilogy on grief, let bleeding girls lie, is an exploration of caring for others, even when you have only just met them. Or you see their pain streamed to your device from across the other side of the world.

All three women in the play – Lou, Grace and Juice – are beautifully rendered in the exquisite writing and the nuanced performances.

Emily Tomlins tells us so much about Lou in the way she peels open a mentos with one hand and her teeth, and scrawls endlessly in her journal before and after the attack. Belinda McClory layers in a lot of hurt and loss and disillusionment in Grace, when on the surface she says things that make her seem like a dreaded Karen. Chanella Macri plays Juice as if her history is pressing her down so much that even the smallest act of kindness is both heart-breaking and a huge relief.

Olivia Satchell’s script and direction are insightful and generous. We are brought into these women’s lives gently and she takes our hand and helps us through the waiting and the sorrow and the grief.

There was one false moment for me, at the end of the play, where a song is used to focus all the pain and to perhaps to illicit an outpouring of emotion. I think it's a pity that, though the song is beautiful, the play was not allowed to end on its own grace note. The play had already moved me in subtle waves. I don’t think it needed this torrent.

At one point, early in the play, Grace and Juice discuss the reason they are even at the blood bank. They recognise that it’s partly motivated by feeling good about themselves; there is an element that’s not entirely selfless.

But they are donating plasma, not just blood. They are going a step above. Even in a world where nail bombs are exploded at a concert, when things seem hopeless, small acts of kindness and connection are invaluable.

And there’s never nothing to be done.

Olivia Satchell’s Grief Trilogy will be presented at La Mama Courthouse in March 2023. They are raising money for this season now, at the Australian Cultural Fund. 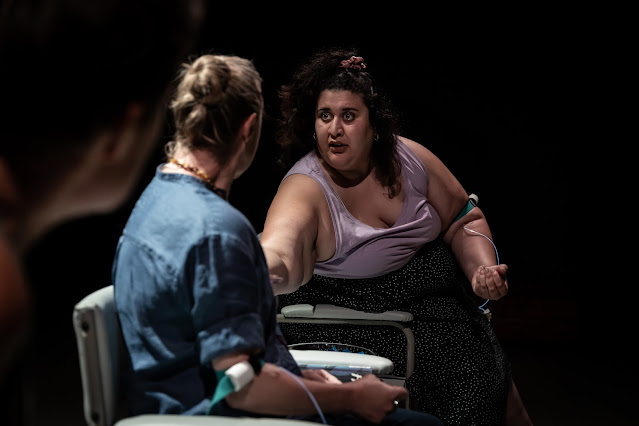