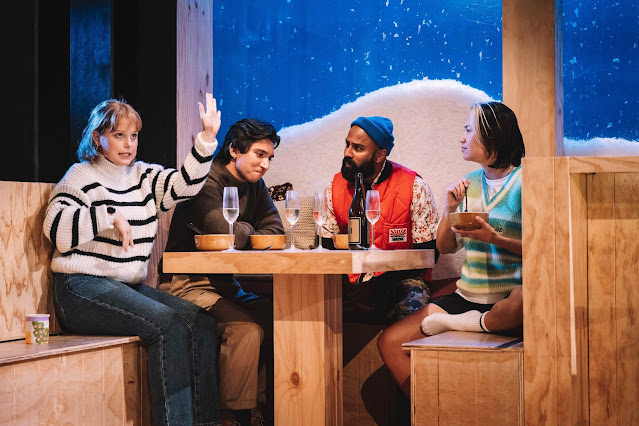 Niv has invited his brother Sai up to Mount Buller for a weekend in the snow to reconnect. Their partners, May and Kate, are with them, so they can all get to know each other better.

Niv and Sai have become estranged since growing up and moving out of their upper-class suburban household, which they admit wasn’t as pleasant as it might have looked from the outside.

Niv has just become vegan, which annoys his younger brother. Kate keeps stepping in it with racially-insensitive remarks, which she keeps apologising for. And May, even though they are off the clock and ready to party, is trying to bring them all together with the tips and tricks they have learned from their day job at a non-profit that teaches rich businessmen not to be pricks.

Trapping two couples at a dinner party or a weekend away is the plot of numerous plays and films. Stay Woke isn’t about generational conflict or hippies versus conservatives, though. Aran Thangaratnam’s play is about the millennial minefield of never knowing exactly the right thing to say. But is it really a minefield or is it just easy for us to describe it that way? Isn’t the path through pretty obvious, if you’re willing to look for it?

Psychologist Abraham Maslow wrote in his 1966 book, The Psychology of Science, “I suppose it is tempting, if the only tool you have is a hammer, to treat everything as if it were a nail.”

If you are limited in your resources, you’ll tend to treat everything the same way.

If you’re expecting a situation to be tense, all you’ll see is the tension.

Because the foursome is close in age – less than ten years separating them – they have a lot of pop-cultural references in common, but the brothers have Sri Lankan heritage and Kate grew up in the Australian bush. May is non-binary, something Niv failed to mention to his brother, and they are desperate not to have to be the one to keep the peace – but Niv is angry and Sai is frustrated and Kate just keeps apologising, always on the verge of tears.

Stay Woke has a lot to say about race, cultural sensitivity, gender politics and generational trauma. But for some of the time, while the rapid-fire jokes are getting to the hearts of the matters, without giving us a moment to catch our breath and to sit with these characters.

Niv and Sai’s sibling conflict is fascinating, though. Yes, they do regress into childhood patterns, but this isn’t a simple descent into name-calling and wrestling. The thing they have become passionate about over the years, informed by their awful-behind-the-Toorak-façade upbringing, is the real heart of the story.

Dushan Phillip’s Niv is angry from the get-go and it’s tempting to think he’s one-note but he’s not. He has reasons to be outraged, many reasons, some of them even having to do with his brother. It would be easy to say that late in the play we get a glimpse of the real Niv, in a quieter scene with Kate, but his angry face is a defining part of him, too.

He’s a brown man living in a country that has a long, long history of treating non-white men terribly. Dushan is a force to be reckoned with here as he reveals everything that’s happening in Niv’s brain and heart; sometimes with a shout and other times with a sly look or single word.

Kaivu Suvarna’s Sai is more softly spoken, after years of learning not to speak up or speak back. He covers a lot of his anxiety with humour and Kaivu exudes a natural warmth, making Sai smooth and laidback but ready to pounce when necessary. The ongoing tension between Niv and Sai is the real highlight of Thangaratnam’s writing.

Rose Adam’s Kate is a trickier part to get right, for the writer and the actor. Kate feels the most like a caricature; her background filled with a lot of cliches to put her in conflict with Niv. She’s the daughter of a cop and once dressed up as Princess Jasmine from Aladdin, complete with a severe spray tan. She becomes the very definition of white-girl-wasted late in the show and turns on the white-woman tears to try to get her own way at the end. It suits the dramatic premise of the show, but Kate felt paper-thin compared to the complicated brothers.

May is a show-stealer because they can speak their mind – in glorious, unruly ways without ever offending. May shows their love for Niv verbally and physically; a truly compelling performance by Brooke Lee. They might be remembered for their outrageousness, but Brooke was also able to project some of the character’s true warmth and flirtatiousness without taking the character over the top.

This is Aran Thangaratnam’s second play and Malthouse Theatre/mainstage debut. In fact, for Stay Woke, the entire cast and crew were on the Malthouse stage for the first time.

Director Bridget Balodis has been working in independent theatre for years and has recently directed Malthouse’s digital offerings during the pandemic and has worked with the theatre as part of their Education seasons and Engine Room developments. This is a strong mainstage debut for the innovative director.

It's tempting to decide the problem with the show is that it has too much to say. It tackles so many topics and that tendency often leads to subjects not being explored enough. I think the real stumbling block of the show is that it hits the funny button too hard, too soon. Yes, I know, it’s a comedy, but I don’t want to feel assaulted by punchlines.

The second half of the show isn’t less funny, but it’s less hectic and everything comes a bit more into focus. The quieter scenes are a bit of a relief but the early rage is blistering and is borne from so much pain and hurt and justifiable anger, who am I to say this writer and cast shouldn’t shout the place down?

Maslow’s talk of hammer and nails is about cognitive bias and I think it speaks to these characters, too. They come to this weekend away with certain expectations and they cling on to things that confirms that bias for too long.

Stay Woke is a clever rendering of a conversation that feels very online and the sort of subject that theatre needs to tackle, to bring in new audiences.

And that’s advice for the audience as much as the characters.

Stay Woke is playing at the Malthouse Theatre until March 13th and then travels to the Darlinghurst Theatre from March 16th to April 17th. 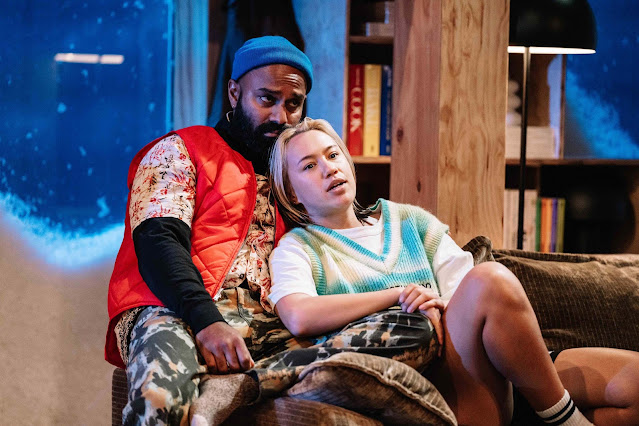