With this mnemonic, it’s easy to remember the fates of Henry VIII’s wives. If that’s all you wanna do.  The musical, SIX, now playing in Melbourne, wants you to know more about these women – divorcing them all from just being the wives of one King of England.

Opening this week at the Comedy Theatre, the musical is a concert that starts off by pitting the women against each other in competition. Which of them is most remembered? Which woman suffered more than the others? Who did Henry love above all? It’s a simple, effective conceit for what began as a show at a 100-seat venue at the Edinburgh Fringe in 2017.

What comes next is an ingenious selection of songs for six divas, honouring these women and paying homage to pop music acts from the last two decades.

Much like Hamilton, playing across the road at Her Majesty’s Theatre, Six has a deliberately diverse cast on stage playing the Queens, supported by a five-piece all-female band. May more and more theatre look like this moving forward; if theatre audiences can accept watching Henry VIII’s wives as an all-girl group, we’re okay with cross-racial casting.

Catherine of Aragorn is up first with the song No Way, inspired by the real Catherine’s speech at Blackfriars to argue the legitimacy of her marriage to Henry. Sung in the style of Beyonce, performer Phoenix Jackson Mendoza got the audience amped up and on her side after the exhilarating opening number, Ex-Wives, where the ensemble explained the reason for them all being on stage together.

Next up, Kala Glare’s Anne Boleyn struts around the stage and in pure fuck-you Lily Allen style, blasts Don’t Lose Ur Head about all the trouble she had trying to be with Henry in the first place, let alone by the end.

Jane Seymour (Loren Hunter) gives us an Adele-style ballad in Heart of Stone and then Anna of Cleves pops over from Germany after sitting for her portrait at the House of Holbein. Kiana Daniele is a towering presence on stage and gets to have a lot of fun channelling Lorde and Nicki Minaj during her solo number, Get Down.

The best song of the night is All You Wanna Do, Katherine Howard’s ode to the emotional trauma of her love life – hoping the next guy who comes along will be different. It’s tough to listen to, thinking about Katherine herself, but also listening to the style of song you might hear from a teenage pop star but with lyrics that are a punch in the gut. Chelsea Dawson delivers a stand-out performance amongst a stage of stars.

Shannen Alyce Quan stepped on stage for opening night as Catherine Parr, the survivor of the six, and most determined to re-write her own history through I Don’t Need Your Love. And she’s the one that turns the conflict concert on its head.

Six is a smart show about examining the history we know and are forced to remember by rote at school and digging in deeper to find the truth. These women have fascinating stories in their own right. Being one of six is not enough recognition for them.

After premiering at Edinburgh Fringe in 2017, Six has had a meteoric rise, going on tour through the UK in 2018, opening on the West End in 2019 and springing up in Sydney and on Broadway in 2020. It will continue to tour Australia, New Zealand, the UK and the US through 2022 and beyond. Seems fitting that an all-girl group might take the world by storm, much like the inspirational pop divas the show pays homage to.

Six is the kind of show that inspires cheering fans and invites people to film the final song, MegaSix, because that’s the sort of thing that happens at concerts these days. The show knows its audience is more than just theatre fans but those who love songs that inspire cheers, tears and a standing ovation at the end and a clap-along during the encore.

This show is fun but with its smart, insightful and incisive commentary, it’s also a show with a great deal of substance. And by the time it’s over, hopefully you’ll remember more about the Six women than how they died.

Six is currently playing at the Comedy Theatre in Melbourne until the end of August.

Annika is a Melb.Theatregirl said…
I think Loren’s performance of Seymour was excellent. She’s shows both the heartbreak as well as a fun side to her. She’s very engaging with the audience.
All the queens are engaging (esp to the first few rows) and that fourth wall is broken almost immediately making it feel even more like a pop concert than a staged production.

Costuming is so creative. Again inspiration from styles like artists like Katy Perry, taking the parts of clothing from the Tudor age and giving each queen a different modern identity and highlight their personalities like any modern girl band similar to Spice Girls. Example Aragon in gold - identifying her thoughts of being most important and diva like qualities or having Parr in pants a nod to her being a women ahead of her time with her achievements in education and writing. And giving Boleyn & Howard a neck choker with their initial - identifying them, as the both who loose their heads. And the extremely clever way of their mic holders on their costumes.

This show has you leaving feeling inspired and joy that you get from seeing your fav band/singer in concert.

“What year is this?” Dale Cooper asks in the final scene of Twin Peaks: The Return , the last of many unanswered questions left as the 18-part feature film concluded a week ago. It’s far from the first time we’ve seen someone who looks like Dale Cooper lost for answers over recent months. But it might be the first time we have definitive proof that he’s in over his head. Mr C, Dale Cooper’s doppelganger, who was first seen in the original series’ finale back in 1991, returned to the town of Twin Peaks with a goal in mind. Mr C was flexible, though. He had to be; he’d set so many things in motion over twenty-five years, if he’d remained fixated, he would never have come as far as he did. Dougie, Dale Cooper’s tulpa – created by and from Mr C, wandered aimlessly through life, but slowly made every life he touched better. Plans change and Dougie changed with them. Slowly but surely, Dougie pieced together Cooper’s past life and became richer for it. Agent Cooper, th 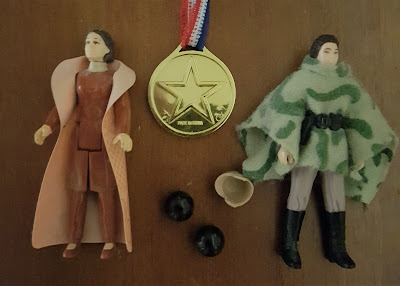 Two Princess Leias, a medal and some broken jewellry Did I ever tell you about the time Carrie Fisher kissed me on the cheek? Stick around, I’ll tell it again soon. Carrie Fisher was Princess Leia; no getting past that. Except, of course, she did. And then she stepped right back into being her last year. She was the right person to play Leia because she was the right age at the time and she is part of Hollywood royalty. She was also the right person to have been Leia in retrospect, too. Can you imagine anyone else describing Jabba the Hutt as a “giant saliva testicle”? Anyone else who would bring an audience member up on stage to mount a Leia “sex doll” and whip it away before they get close enough to fulfil their childhood fantasy? Actors, even those of Star Wars­­­ -level fame, go in and out of the spotlight. Oh, you could spot Fisher on screen in the 1980s and 90s, but much of her hard work went on behind the scenes, as a script writer and script doctor. Hook , Sist